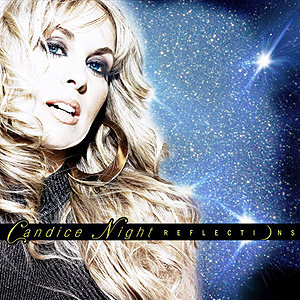 Candice Night’s “Reflections” – her first solo effort since becoming the lead songstress of the folky-renaissance music juggernaut, Blackmore’s Night, 15 years ago – is one that falls short of establishing her as a viable solo artist.  While she does attempt to break the mold of the olde-school 16th-century style music that she and husband, former Deep Purple guitarist Ritchie Blackmore, have made unique and refreshing, the vast majority of the songs on the disc stay firmly planted in the landscape of quiet lovelorn ballads that Blackmore’s Night fans have heard many times before.

As has often been the case with many of the releases in the Blackmore’s Night back catalog, “Reflections” opens with the album’s strongest track, “Wind is Calling (Hush the Wind)”.  The song ethereally seeps in with Night chanting a wispy mantra refrain and, with a flourish, her often double-tracked vocal jumps into the foreground – a place where it will stay throughout the entire album.  While the song doesn’t signal a radical shift from her usual style, it’s good enough to provide a strong foundation and raises expectations that the entire outing will at least be an interesting one – and perhaps even a good one.

After the lead-off cut, Candice suddenly shifts gears and throws a rousing country-style romp into the mix in the form of “Gone Gone Gone”.  While it’s a fun tune and her voice fits fairly well within the genre, it’s far too derivative of the myriad of attitudinal down-home country hits that have become staple songs at karaoke haunts.  Night needs to infuse the song with the type of storytelling spunk that make songs like Carrie Underwood’s “Last Name” and the Dixie Chicks’ “Goodbye Earl” catchy and memorable, but her lyrics probably could at least use a couple of tall cans of Coors as a main ingredient.

“Dangerous Smile” makes “Gone Gone Gone” seem like a gem.  As much as Night can pass as a poor woman’s Shania Twain, “Smile” clearly proves that she should leave Gaga such as this to the Lady herself. With fuzz power chords and the occasional electronic drum mega-fill, it quickly moves from being a confusing anomaly to a sheer annoyance.  It’s simply silly and so unnatural that it makes one wonder if she’s been pulled away from suckling the Renaissance teat completely against her will.

The remaining eight tracks are what we’d expect: a collection of haunting Stevie Nicks-ish ballads that all too often have lost and unrequited love as their theme.  At best, they play as decent demos that could be fleshed out for possible inclusion on a future Blackmore’s Night album.  But her insistence upon this style the quickly becomes repetitive and fatigue-inducing.  Indeed, it’s enough to make “Reflections”’ brief 39-minute running time seem insufferably longer – so much so that, by the time the album’s violin-centric coda is reached, it’s something of a relief that Night’s solo journey has finally concluded.

The disc’s production – helmed by Blackmore’s Night producer Pat Regan – is consistently top-notch. Night’s vocal powers have clearly strengthened in the 15 years since “Shadow of the Moon” was released and Regan keeps her voice front-and-center throughout “Reflections”.  As far as the backing music is concerned, the only musician credited in the album’s liner notes is violinist Elizabeth Cary.  It’s a mystery as to what other players were on board with the project, but it seems that none of the talented Blackmore’s Night band o’ merry men were involved.  And it’s clear that Ritchie is nowhere to be found as he most definitely would have added a much-needed guitar solo to the train wreck that is “Dangerous Smile.”

If there’s anything that “Reflections” proves, it’s that, while Candice Night has strong enough pipes to hold her own vocally, she desperately needs augmentation in the form of a powerhouse backing band like the poofy shirt and tights-clad minstrels of Blackmore’s Night.  Without them, she’s something of a damsel in distress.