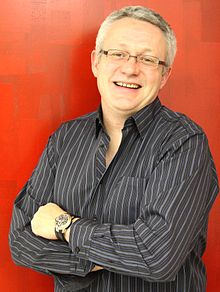 Florian Bellanger is one of the judges on the Food Network Series “Cupcake Wars”. He is also the owner of Mad Mac Macaroons. Media Mikes had a chance to chat with Florian about his work on the show and get some cool behind-the-scenes stories.

Mike Gencarelli: Tell us about how you became involved with Food Network Series “Cupcake Wars”?
Florian Bellanger: It is a funny thing. One day I received a message from one of the producers on my Facebook page that they were working on a new show and needed a judge. They sent me a pilot, which they actually still air occasionally. It is the only episode that I am not on board. After they got a decent response from the pilot, Food Network decided to go into production. They wanted someone that was a pastry expert and not from the cupcake world. So I did a few auditions for it and eventually I got the job. The two process took about two months. At the beginning we weren’t sure how the show was going to do, so we only shot eight episodes for season one. We didn’t know that it would be such a success.

MG: Tell us about how you choose your judging style?
FB: When they first hired me they asked “Have your ever watched ‘American Idol’?” I said, sure. They said basically we have a Paula and we are looking for a Simon [laughs]. They asked if I could do a Simon. I told them I could but it would be under some conditions. I don’t want to insult the baker personally. I wasn’t going to tell them that “You are a loser and shouldn’t be here”. Now can I be a tough cookie…yes I can be a tough cookie. Can I insult their food. Of course I can tell them that their food tastes like shit [laughs]. But I won’tattack them personally. The other thing was that I didn’t want the judgings to be staged. I didn’t want an ear piece or anyone telling me what to say or do. I wanted to judge the way I wanted to and speak my mind and be honest. They said that they weren’t looking for that either and were very upfront and honest. We got along very well. 75 episodes to date and I have no regrets at all.

MG: Any fun behind the scenes stories from the show?
FB: Some of my comments don’t make it into the show sometimes, since they were too strong [laughs]. Like “Your cupcake is so small, it looks like a midget cupcake”, they said that they didn’t want to air it so not to upset anyone. I don’t mean anything bad, I just speak my mind and I am French. So sometimes I speak too strong. One day we had a mother and daughter contestant team and they were fighting so bad that the mother walked away right in the middle of the competition. We had a few cooks cut themselves by accident. The cupcakes were covered with blood and that food couldn’t be judged (or eaten), obviously. What you see on TV is really what you get. They really work against the clock. We never stop the clock ever. If they are not done, then they get eliminated…that is it. It is really high pressure environment. We start shooting around 7am in the morning. They have to work and also find time to talk with the cameras as well. It is not only competing, they need to make it into good TV. So there is a nice blend of the TV aspect and the competition aspect. It is a long day for them. For Candace (Nelson) and myself, it is easy. We sit, eat and comment, but we are in the room the whole time.

MG: After each show, the winners always get to go to these parties; why aren’t the judges invited?
FB: Of course since it is TV, they make you think the party is that night. It would be impossible to have the show shoot the same days as the events. On TV, we make it look like they go straight to the parties. They show up at a later date and it makes it more difficult. The winning display is saved but they have to re-bake all of the thousand cupcakes. The day of shooting those cupcakes go to charity. Sometimes the contestants are coming from the East Coast and the party is in Los Angeles. So it is a big of trip sometimes for these contestants.

MG: Tell us about what we can expect from the future of the show?
FB: We just started shooting season seven now, which is pretty cool. Before that we have done seventy-five episodes already. It is amazing. We are shooting another thirteen for season seven. Then probably another thirteen this October. It is doing really well. We are in the top five for the Food Network’s shows, in terms of ratings. Right now Food Network is running thirty-nine episodes a year. I heard but I am not 100% but I hear they want to bring it to fifty-two episodes a year. Which would be one new episodes each week. So that would be very amazing for the show.