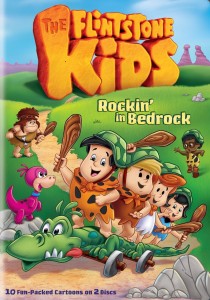 Growing up in the 80’s, I used to soak up any and all cartoon that aired either after school or on weekend mornings. I wasn’t old enough to watch the original “The Flintstones” but I was always a fan of the show. My parents told me that I used to run around the house as a kid screaming “YABBA DABBA DOO!”. When “The Flintstone Kids” aired, it was an instant favorite of mine. I was able to watch the pint-sized version of my favorite stone age family, but when they were kids. If you love the original “Flintstones” then it is a no-brainer, “The Flintstone Kids” is a must-own title to add to your collection. I have a 21-month old daughter and she has already watched these episodes numerous times, so I like being able to introduce her to a show that I also grew up with as a kid.

Official Premise: Before Fred and Barney married Wilma and Betty, and became stars of the enormously popular animated primetime series The Flintstones, they were fun-loving kids who hung around together in the town of Bedrock. The Flintstone Kids follows their escapades as adorable schoolchildren and introduces viewers to some new characters, including Rocky Ratrock, Dreamchip Gemstone and Miss Rockybottom, as well as family members Ed and Edna Flintstone, Robert Rubble, Doris Slaghoople and many others.

“The Flintstone Kids” originally aired from 1986 to 1988 on ABC. There were 78 episodes in the series. This is the first time that this show has ever been released on DVD. This release includes ten episodes including: “Barney’s Moving Experience”, “Curse of the Gemstone Diamond”, “Dusty Disappears”, “Freddy’s First Crush”, “Heroes for Hire”, “Poor Little Rich Girl”, “The Bad News Brontos”, “The Fugitives”, “The Little Visitor/Grandpa For Loan” and “The Rock Concert That Rocked Freddy”. This means that there are still 68 episodes left to release, so I have a feeling that Warner Bros is going to be released these volumes for some time.