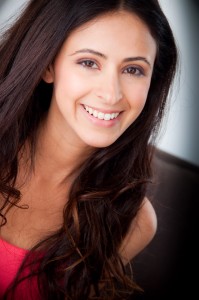 Jessica DiCicco is a voice actress best for voicing Flame Princess on “Adventure Time”.  She also various characters like Patches on “Pound Puppies”. She recently stepped behind the character directing Kovas’ latest music video for his song “Ice Cream”.  Media Mikes had a chance to chat with Jessica to chat about her voice work, her love for directing and her plans for visiting fan conventions.

Mike Gencarelli: Tell us about how you ended up voicing Flame Princess on “Adventure Time”?
Jessica DiCicco: It happened like they all do, which is through auditioning. It’s a way of life in this business, you try out for different projects everyday. The funny is that I had a feeling about the Flame Princess audition right away when I first got the email. I had heard of “Adventure Time” but I didn’t know what it was really about. So I did a little research and I watched some YouTube clips. Immediately, I knew this was a show I wanted to be on. I sent the audition and I was very happy when I found out I had booked the role. From the very first script that came in, I thought the show was just so amazing and well written. I knew that I was in for something great.

MG: What do you enjoy most about voicing that character?
JD: I love that she has such a range of emotion. She can go from super sweet to insane and crazy at the drop of a dime. It is so fun to play a character like that.

MG: Can you reflect on the fandom surrounding your character and the show itself?
JD: I have never been a part of such a big show. It has been such an amazing experience. It is very reminiscent for me of “Simpsons Mania”. I remember when “The Simpsons” had just come out, there was so much energy surrounding the show, it truly struck a cord with its audience. I was a huge fan of “The Simpsons” when I was a kid, I would wear my Simpson’s denim jacket, talk on my Bart phone, then go to sleep draped in my Simpson’s bed sheets. The insanity and excitement surrounding “Adventure Time” is reminiscent of that. I was actually at the Annie Awards this year and was presenting with Lucas Grabeel, and Matt Groening also was there. I got the chance to talk to him and it turns out his son is a big fan of “Adventure Time” and even was an intern on the show. I ran my theory by him about how “Adventure Time Mania” is reminiscent of “Simpsons Mania” and he said that he couldn’t agree more. Right from the creator’s mouth! So glad that I ran that by him, it was a very cool moment for me.

MG: How does your work on “Adventure Time” differ from Patches on “Pound Puppies”?
JD: I feel lucky that I get to voice so many different types of characters. It satisfies my desire to act and be creative. Patches is so much fun, he is so cute, fun and playful- he’s a puppy! I love dogs, so I put my love for my own dog, Kody, into that character. The head writer is Bart (Jennett) and he is incredibly talented. The episodes of “Pound Puppies” are so well written, they have so many layers, twists and turns throughout. It is always very fun to work on this show.

MG: How did you get involved directing Kovas’ music video for his song “Ice Cream”?
JD: Directing the video for “Ice Cream” was blast and easily one of my favorite experiences to date. I met Kovas, he is an incredibly talented music producer and also has a solo artist career, and we became quick friends. I listened to his mix tape while it was in the works and that song just inspired me. I am also friends with Jessie Heiman, the “nerd” from the GoDaddy Super Bowl XLVII commercial, he’s the one who made out with Bar Rafaeli [laughs]. We have been friends and have always wanted to work together. I thought it would be so funny to have Jesse be the main thug in a rap video [laughs]. That is what actually inspired the entire “Ice Cream” concept.

MG: What was your biggest challenge directing your first music video?
JD: I am very hard on myself and I like everything to be as good as it can possibly be. Even with my voice-overs, I really try to focus on my characters and have a deep connection with them. So I wanted to apply this to directing. I wanted the characters to be very solid and consistent throughout the entire video. One of the most fun parts of this video was casting it. As soon as it was cast with these incredibly talented people, a lot of it was setting up the scenes and it was such a joy to watch it all unfold. I was also fortunate to work with the best editor of all time, Steve Forner. It was such a great experience. I didn’t realize how truly happy directing makes me and I can’t wait to try this again.

MG: Do you see yourself pursuing more directing gigs in the near future? Film or TV?
JD: I’m actually directing another music video next week! I was actually offered this next video based on my work from “Ice Cream,” which I did just for fun! I’m excited to let this new-found love for directing unfold organically. I am going project by project. But I would like to challenge myself and try and tackle a short film in the near future. So that would happen within the next year hopefully. At this point, it is just a matter of finding an incredible script that inspires me.

MG: Tell us about “Sheriff Callie’s Wild West” coming out on Disney Junior starring Mandy Moore, Lucas Grabeel and yourself?
JD: I am very excited about this show. It’s the first Western musical for preschoolers, and it has been fantastic working with Mandy Moore and Lucas Grabeel. I play a 7-year-old boy cactus named Toby. The songs we sing get stuck in our heads for days, hopefully the kids love it, that way I don’t feel silly for liking it so much [laughs]. It has such a stellar cast in addition to Mandy and Lucas. It also includes Kevin Michael Richardson, Mo Williams, Cree Summer, Carlos Alazraqui, and Gary Anthony Williams.

MG: I know you can’t talk about it but you also have a few video game roles in the works also right?
JD: I wish I could tell you about them at this very moment! I’m so excited about these new roles. Voicing characters in a video game satisfies a whole other part of my creativity. It is very natural acting, very cinematic. So it challenges me in a very different way which is very fun for me.

MG: Tell us about how you got started with your girl DJ duo called Kittypillaz?
JD: I just started making appearances at conventions and anime cons. I didn’t realize how much fun they were. I went recently with a fellow voice actress, and we decided to also DJ at the con. She is big in the anime world. The first one we just did was Ichibancon, this past January in Charlotte, NC. We just figured to get out there play some good music and have fun with our fans. It was such an amazing experience, I look forward to doing it again!

MG: What else do you have going on that you would like to talk about?
JD: Fans can reach out to me on Facebook and Twitter. Also I love friendship bracelets. So when I make appearances at conventions, I am offering exclusive friendship bracelets for each con, that will only be available at that specific con. Also I am going to have a contest on deviantART for artists to submit the best Flame Princess fan art for the postcard my next exclusive friendship bracelet will come with. I am a huge fan of art and I love all the fan art that people do for “Adventure Time” and any of my characters. I am very excited to incorporate fan art into this project.

To celebrate release of “Detective Dee and The Mystery of The Phantom Flame”, Media Mikes would like to giveaway THREE copies of the film on Blu-ray. If you would win one of these great prizes, please leave us a comment below or send us an email and let us know your favorite detective film. This giveaway will be open until Monday December 19th at Noon, Eastern Time and is only open to residents of the United States. Only one entry per person, per household; all other entries will be considered invalid. Once the giveaway ends, Movie Mikes will randomly pick out winners and alert the winners via email.

On the eve of her coronation as Empress (Carina Lau, 2046), China’s most powerful woman is haunted by a chilling murder mystery: seven men under her command have burst into flames, leaving behind only black ash and skeletal bones. Recognizing this threat to her power, she turns to the infamous Dee Renjie (Andy Lau, Infernal Affairs, House Of Flying Daggers): a man whose unparalleled wisdom is matched only by his martial arts skills. As he battles a series of bizarre dangers, he unveils a chilling truth that places his life, and the future of an entire dynasty, in peril.

Right off the bat when you see the names Tsui Hark and Andy Lau together it is a guaranteed success. Tsui Hark is known for such greats as the “Once Upon a Time in China” series and “A Better Tomorrow” series. Andy Lau is amazing as usual and definitely adds great comedy to this film and also kick some serious ass in the fight scenes. The tagline on the box really says it all and I really can’t top it…”it’s Crouching Tiger, Hidden Dragon meets Sherlock Holmes”. That is a perfect description of this film. It has a little for everyone…it has a funny yet serious story, great choreography in the fight scenes and just visually stunning.

The story takes place in the year AD 690 just prior to the coronation of Empress Wu Zetian (Carina Lau). There are a bunch of mystery murders where men have burst into flames with no explanation. In order to avoid a delay in her coronation, she calls in Detective Dee (Andy Lau) to solve the case. He dives into the issue and uses his Sherlock Holmes-technique to get to the bottom of this mystery…and also does some kick-ass martial arts along the way.

The Blu-ray presentation is simply amazing. The video looks fantastic and only adds to the stunning visuals in the film. The sound is very crisp and the add a lot of the fights scenes. The special features on the film are great. “The Making of Detective Dee” is split into four parts focusing on the shooting and interviews from the cast/crew. “Creating the Characters” and “The World of Dee” are great features which goes into the character development. I think that Detective Dee is a great character and would love to see him in future installments. “Weapons, Stunts and Action” is also great and showcases the “wow” factor of the film. Lastly there is galleries from the production stills, posters and behind-the-scenes.