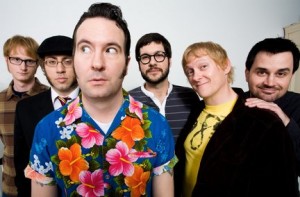 Johnny Christianson is the trumpet player for the ska band Reel Big Fish. The group’s latest album “Candy Coated Fury” was released in July of 2012 and the band has been on the road ever since promoting its release. Media Mikes had the chance to talk with Johnny about the album, the bands new music video and what he is most looking forward to during this summer’s Warped Tour.

Adam Lawton: With there being 3 years between album releases did the band take any different approaches once you were back in the studio?
Johnny Christianson: I think maybe we played better than we ever have. One thing about getting older is that you hopefully get better at your instrument and your craft. As a result of that the song writing and performances will also get better. When a band has been around for 22 years like we have hopefully they are able to write some good stuff in that time. “Candy Coated Fury” is a really fun album and I think it’s the best one we have done yet.

AL: With the band using a number of different instruments what are your song writing sessions like?
JC: Usually Aaron will bring an outline for a song he wants to do. For the latest album we jammed out the songs and made some demos. We then went out on the road and started playing those songs during our sound check where we hashed things out. 99% of the songwriting is done by Aaron. On this last record he and I wrote a song together which was really fun. If someone in the band has a song they want to bring in Aaron will definitely take a look at it.

AL: Can you tell us about the new video for “Don’t Stop Skankin”?
JC: We had a lot of fun working on that video. Sometimes when you shoot these things they can be quite tedious. It’s not as glamorous as people may think. There is a lot of waiting around. At the same time we were shooting the video we also were doing and interview/photo shoot for Beer Magazine. In between takes we would be bouncing between to the two things. We had a full day of running around. There were a lot of fans at the shoot which was also really cool. I hope us having a good time translated through the video.

AL: The band has been around since 1991 and things have changed quite a bit since then. What do you feel is the hardest part about being in a ska band in 2013?
JC: For me it’s being away from my family. Having just had a baby recently being on the road can be tough. Over the past 5 years with the invention of Facebook and other similar sites how we communicate with our fans has been revolutionized. We are able to get the word out much faster and easier than we could in the beginning. Incredibly the band has been impervious to the ups and downs of the economy as we can pretty much go anywhere and play on average to a thousand people a night. We are lucky enough to be able to travel with music and we are all very thankful.

AL: What do you think has attributed to the bands staying power?
JC: I think a lot of it is that for anyone who comes out to one of our shows they are going to have a good time. They are going to be entertained. We take playing very seriously. Not only are we there to play music but we also need to entertain people. I think a lot of bands don’t understand that. Doing this for 22 years now you get really good at what you are doing. I think anyone can come to our shows and have a good time.

AL: What are the bands plans after the current portion of the “Candy Coated Fury” tour wraps up?
JC: I think we have about 3 days off towards the end of February then we fly straight to Europe where we will be for two months. We will be hitting every place from England to Poland. We also we be heading down in to Spain and Italy. That runs till about April and then we will be back in the states playing colleges until the Warped tour starts up.

AL: It’s been a little bit since the band has been on the Warped tour. What are you most looking forward to playing on it again?
JC: One of my favorite parts about being on the tour is the autograph sessions we get to do each day. We get to talk to a lot of people as we will sign for about 2 hours each day. Getting to meet all these different people every day is my favorite part about being on the tour for sure.

AL: Is there anything else that we can be watching for from the band in the coming months?
JC: Maybe some more new videos? Right now we are really looking forward to heading to Europe and then coming back for the Warped tour. After that we will probably start work on a new record.