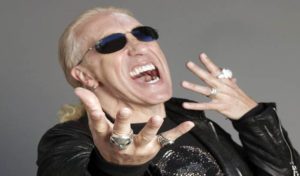 Dee Snider is the out spoken, wild hair front man of the heavy metal band Twisted Sister. Dee is currently one of the subjects in a recent exhibit at the Rock and Roll Hall of Fame titled “Louder Than Words: Rock, Power and Politics”. The exhibit showcases some of the most important debates of our country through the lens of rock music. Media Mikes had the chance to talk with Dee recently about the exhibit, his thoughts on the country’s current political climate and the Twisted Sisters farewell shows scheduled for this fall.

Adam Lawton: How did you become involved with the current Rock and Roll Hall of Fame exhibit “Louder Than Words”?

Dee Snider: As it turned out my involvement during the 1980’s in Washington was a significant rock and politics moment. They reached out to me to do an interview and afterwards asked if I had any items I could loan them for a display. I ended up donating some of the things I wore the day I testified before congress. After talking with them more I was invited to the opening of the event which evolved into me singing an acoustic version of “Were Not Gonna Take It”. We did that with just piano and vocals and it went real well. This song is so much more important and says so much. It’s a lot more than just a great party song.

AL: Prior to your appearance before congress were politics something you had always been interested in?

DS: I had no interest in politics at that time. I was a young man in rock and roll and you just don’t think about those things. The song was written about my/our oppressors and I was sharing it with our audience who were equally frustrated. Now were older and there are greater concerns. The political climate right now is just awful! The fact that we have probably the most despised person in the history of presidential elections running against the second most despised person. The elections are going to come down to voting for one of those two people. That’s not the way it’s supposed to be so that’s why now more than ever I want “Were Not Gonna Take It” to inspire people. I want people to listen to that song and have it inspire them to try and make a change to get things back to the way our fore fathers intended it to be. People have to vote based on if they like the other guy or girl candidate instead of what issues they stand for. People are viewing this election like a reality television show. We all know reality television is not real but this is! When it comes down to this election we are just boned. I am actually in the process of shooting a new video for “Were Not Gonna Take It” with the guy who shot the original. This time around the video is not going to be funny. It’s going to be a fucking statement! The thing is its too late now but it’s not too late for the future to make something happen.

AL: Initially “Were Not Gonna Take It” was attached to Donald Trump’s campaign. How did that come and about and how did things work when you asked them to stop using it?

DS: I want to make something very clear. Donald Trump is a friend, a great guy and a class act. Unlike most politicians he called me and asked if he could start using the song. Him being my friend I told him he certainly could use it. Now when you are friends with people there is a rule. You don’t talk about three things sports, religion or politics. We never talked about the things he was standing for so when I started to see and read this stuff I thought “Holy Shit!” I called him up and told him I couldn’t stand behind the things he was saying. He said ok and that was it. Donald is a class act because he asked me first to use the song and then stopped using it when I asked him. I still like him as a person but we definitely don’t see eye to eye politically.

AL: Having seen where “Were Not Gonna Take It” has gone what do you think the young Dee Snider would think of all this?

DS: Young Dee Snider would be stunned. That song was written to rile up the masses and scare parents and it did that. Then it leads to me being the poster boy for all things bad about rock music and having to defend my songs and speaking out about censorship. Cut to now and it’s a rock and jock anthem, It’s on kids shows and commercials for women’s pre-menopausal medications. The ultimate irony of all happened a couple of years ago when the “Rock of Ages” film came out. Catherine Zeta-Jones plays a typical esc character fronting a PMRC esc organization who is trying to stop rock and roll. What song do they end up singing? “Were Not Gonna Take It”. You had to be fucking kidding me! That was the ultimate definition of irony. If you told young Dee Snider that thirty or forty years ago he probably would have punched you in the face! (Laughs)

AL: Twisted Sister was recently the topic of a documentary titled “Twisted F****** Sister” which showcased the bands early career. Are there plans to release a second part to that showing the success of the band?

DS: We sort of covered that with the “Behind the Music” special that aired on VH1. That’s the story most people tend to already know. We supported the making of that documentary but it was not something that was instigated by us. There was a documentarian who was intrigued by our story having learned that we were a band for ten years prior to making it big. This was something he was taken with and we welcomed his interest as too many people think that we jumped on the bandwagon of hair metal. We didn’t jump on it we built it! There were no bands like Motley Crue or Poison when we started. I give credit to Hanoi Rocks and Quiet Riot as well for also contributing but there was certainly no wagon to be jumped on. We were carrying the torch for something that record companies were rejecting. This film shows how hard we fought to get noticed and to where we are.

AL: It was recently announced that the band will be playing a handful of farewell shows this year. Can you tell us about those plans and what prompted this decision?

DS: I think this is long overdue. I don’t want anyone to take that the wrong way but I never intended to reunite Twisted Sister and then be together longer than we were when we first got together. I wanted to fix the broken relationships we had with one another and then end on a higher note than the one we ended on when we quietly disbanded in 1987. After a few years of reunion shows we had accomplished what I had wanted. We played the Wacken Festival to seventy five thousand people and it was a perfect show played to a perfect crowd on a perfect night. It also was captured by a dozen or so HD cameras and is available on DVD. That’s how I wanted to end things and I asked the guys if we could stop however the guys voted to keep going. With AJ passing away the sense of who Twisted Sister is and how we wanted to be remembered has become very strong. We know guys have members die and they keep going but we don’t want to be that band. After AJ died it seemed like a logical stopping point for us but with one caveat. AJ was the nice guy in the band however he didn’t have any sort of estate planning set up in the event something happened to him. These shows are going to allow us to say our goodbyes to the fans but also help raise some money for AJ’s estate. Along with our love for AJ and with the help of Mike Portnoy who is one hell of a drummer we did a run of shows last year and will be doing some this year as it will be our 40th anniversary. After these show’s that will be it for us. I don’t think anyone would fault us if we wanted to continue on indefinitely however there are other things we have to take in to account besides the loss of AJ. We perform with a very high energy rate and aggressiveness which has become expected of us. I don’t want to let our fans down. With a lot of work at the age of 61 I am still in great shape but no one beats gravity. I don’t want to go down on stage with a broken hip or something. If I did I don’t think the guys would even know something happened because they have seen my roll around on the floor before. (Laughs) Those guys wouldn’t think anything was really wrong until the EMT’s showed up as they probably would just assume I was milking it.