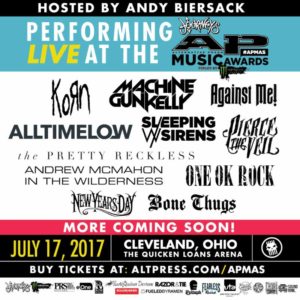 CLEVELAND, OH – The Journeys Alternative Press Music Awards, Fueled by Monster Energy are thrilled to reveal this year’s first wave of performing artists! In itself, the alternative genre is an amalgamation of different styles and influences, and with that in mind, the 2017 APMAs look beyond a single style of music to produce an entertaining evening for just about any music fan.

Korn’s Jonathan Davis states, “We’re really excited to perform at this year’s awards and are looking forward to seeing all our fans in Cleveland. I performed at the first ever APMAs back in 2014 with Asking Alexandria and it’s been awesome to watch how this show has grown over the years.”

Regular tickets are officially on sale now at http://www.altpress.com/apmasand start at just $40 to experience all the action the APMAs have to offer! In addition, VIP tickets are available – including Monster VIP Table, Ultimate VIP and Premium Seating packages – offering the best seat in the house. Visit www.altpress.com/apmas for more information on these packages, as well as more show details to be announced soon regardingnominees, honorees, red carpet appearances, surrounding events and more.

On July 17, 2017, the fourth annual Journeys Alternative Press Music Awards, Fueled by Monster Energy will return to AP’s hometown and the birthplace of rock ‘n’ roll, Cleveland, OH. The main event will once again take place at Quicken Loans Arena, home of 2016 NBA Champions, the Cleveland Cavaliers. The 2017 APMAs will be hosted by alternative culture superstar Andy Biersack (of Andy Black, Black Veil Brides and star of the upcoming film American Satan) and showcase a refreshed, produced-for-television atmosphere to fully immerse fans in the action.

Last year’s APMAs trended worldwide on Twitter and Facebook for over 72 hours – before, during and after live streaming on Amazon Music’s official Twitch channel, reaching over half a million viewers. The APMAs were the most viewed stream on Twitch the day of show, in addition to being the No. 3 most viewed music stream in the platform’s history. Social media reaction and fan response spread fast and furious across the internet following the red carpet and awards ceremony, reaching 25 million people across Facebook, Instagram and Twitter. In addition, over 240,000 Twitter users tweeted the #APMAs hashtag during the show.

The APMAs have featured performances and appearances by today’s biggest rock stars- including Twenty One Pilots (watch “Car Radio” with Issues’ Michael Bohn here), Panic! At The Disco, Fall Out Boy and Hayley Williams of Paramore- as well as musical legends such as Marilyn Manson, Aerosmith’s Joe Perry, Slash, Joan Jett & The Blackhearts and Billy Corgan of the Smashing Pumpkins.

If you missed out on the fun last year, check out the 2016 ultimate highlight reel here.

Keep your eyes on www.altpress.com/apmas over the coming weeks for new announcements and information on the 2017 Alternative Press Music Awards!

This Month in Alternative Press Magazine:

Alternative Press just announced the ultimate Panic! At The Disco fan issue, available now in stores such as Barnes & Noble, Hot Topic, Target and more (to find this issue in-store, visit www.altpress.com/wheretobuy). The issue includes an exclusive interview with Brendon Urie and details everything from his thoughts on his first AP cover 11 years ago to his nightly routine of selling out arenas, how he ended up doing Fall Out Boy’s drunk history, his time as a Vine superstar and the future of P!ATD. In case all this isn’t enough, it’s also filled with extra posters!