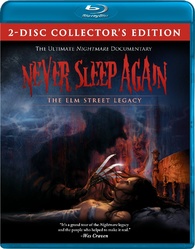 “Never Sleep Again: The Elm Street Legacy” was originally released on DVD in 2010 but thanks to Image Entertainment, we get a new Blu-ray edition. Directing duo Daniel Farrands and Andrew Kasch has been known for their documentary work in the horror genre including the also recently released “Crystal Lake Memories: The Complete History of Friday the 13th”, which runs over 7 hours itself. This film is a four-hour retrospective documentary that really dives very in-depth in the “Nightmare on Elm Street” film series. I have always loved this series, the good AND the bad and this is really the best way to give this series the respect that it deserves. A must have for any horror fan.

Official Premise: For decades, Freddy Krueger has slashed his way through the dreams of countless youngsters, scaring up over half a billion dollars at the box office. In this thrilling retrospective, fans will enter the world of Freddy Krueger and A Nightmare On Elm Street like never before: exploring what spurred mastermind Wes Craven to craft the first groundbreaking film; delving deep behind the scenes of the original and all of its sequels; learning how the cast and crew brought their worst nightmares to life; and finally, understanding the impact the series and its myths have had on modern pop culture and the horror genre. Child murderer. Dream demon. The son of a thousand maniacs. Any way you slice it there can be only one man, one monster, who epitomizes horror like no other.

In terms of special features, the Blu-ray comes stocked with the same amazing special features that the DVD did back in 2010. If four hours wasn’t long enough there are additional “Extended Interviews” covering each of the films and it definitely consists of some great additional content. There is a (or was a) “First Look: Heather Langenkamp’s “I Am Nancy”, which was a doc that came out in 2011 told from the star’s perspective of attending conventions etc. “For the Love of the Glove” follows online sellers as they talk about their work with making custom Freddy gloves. “Fred Heads: The Ultimate Freddy Fans” gives us an inside look into the world of the collectors behind this series.

“Horror’s Hallowed Grounds: Return to Elm Street” is an episode from the great online series from Sean Clark in which he visits all the old shooting locations of the classic film. “Freddy vs. The Angry Video Game Nerd” features James Rolfe talking about the (rather terrible) NES video game. “Expanding the Video Game Universe: Freddy in Comic Books and Novels” talks with authors and artists about their expanding universe for Freddy. “The Music of the Nightmare: Conversations with Composers and Songwriter” is an amazing extra diving into the memorable music from this great series.

“Elm Street’s Poster Boy: The Art of Matthew Joseph Peak” looks into the work of this very talent artist, who also brought us the cover art for this film. “A Nightmare on Elm Street in 10 Minutes” is an extended version of the actor line readings, which is shown in the film’s credits. Lastly there is a teaser trailer included. Whew! This movie and special features all together are so entertaining and I have never seen so much packed into one release. Don’t miss this one!