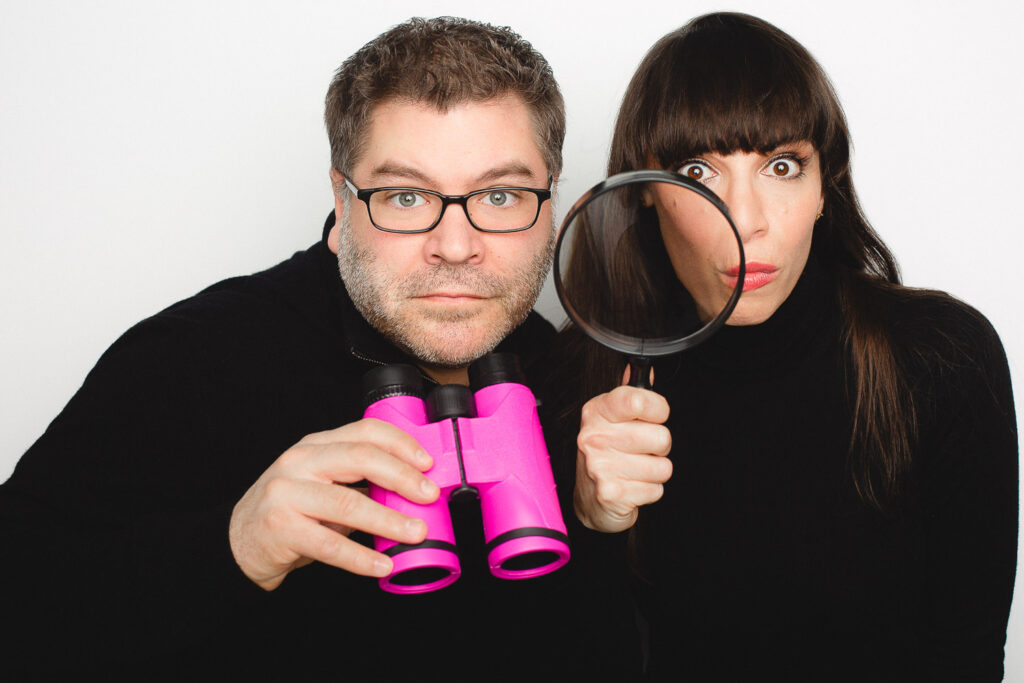 Patrick Hinds is known best for co-hosting the hit podcast “True Crime Obsessed”. Well, he is launching a companion podcast to ID’s hit series “Disappeared” called “Obsessed With: Disappeared.” The series will be co-hosted by himself and Broadway star and Patrick’s friend of 20+ years, Ellyn Marie Marsh (“Pretty Woman: The Musical,” “Kinky Boots”.)

“Obsessed With: Disappeared” will recap episodes of Investigation Discovery (ID) Channel’s hit series “Disappeared” in a comedic and witty tone, with perpetrators always the butt of the joke. Starting with Season 1 / Episode 1, the show will cover infamous subjects like Maura Murray, The Springfield Three and Tanya Rider. The series will be similar in format to Hinds’ hit podcast True Crime Obsessed, which now sees 3.5M+ downloads a month. Media Mikes had a chance to chat with Patrick and Ellyn and the show and find out what to expect.

Channah Zapotoczny: On May 27th you are launching a new podcast called “Obsessed With: Disappeared” – tell me a little about the new podcast?

Patrick Hinds: Ellyn and I go way back. We have been best friends for twenty years. I make another podcast called True Crime Obsessed, where we recap true crime documentaries. The cases that always fascinated me where the ones with missing people. Ellyn is this incredible creative force. She is this Broadway actress, but she does like a million other things. I have always wanted to make something with her. When I heard of this show “Disappeared”, which focuses around missing people, I thought this could be it. Ellyn is also fascinated with true crime and she’s really funny. I thought maybe we could take formula that we have perfected with True Crime Obsessed, which is recapping documentaries and apply that to the show “Disappeared” and then Ellyn and I can be together, laugh and make a podcast about these missing people.

Channah: Ellyn, what drew you to this series?

Ellyn Marie Marsh: Well, everyone loves to have their opinions and have them be heard. This is pretty much the perfect platforms for two hams like Patrick and myself. We are both creative people. Patrick has published books and has done podcasting. We have always supported each other. He is always front row at one of my shows, but we have never been able to coordinate working together. We are both super ambitious and tend to over commit ourselves. We are always go-go-go and have been for so long and finally Patrick said to me that we need to do something together. It was just a matter of making the time to do it and committing to do it. We both love this medium of podcasting. We already have so much history and banter to our everyday life that we should just put this on a platform. It was just the right time and the right thing. It was always something we wanted to do, to join forces and do this together.

Patrick: Ellyn, I don’t know if this is same for you because you have done so much but I have never done a project with a person that is my exact personality type match. With True Crime Obsessed, Gillian is a little more reserved. She is a little more thoughtful that me. Ellyn and I are like screaming and laughing at each other and it is something to be seen.

Ellyn: I don’t know if that good or bad [laughing]. We definitely have to adjust the decibel levels of all of our podcasts.

Channah: So, is that what we can expect for this podcast, the fun laughter and banter?

Patrick: I will say this, I have been professionally recapping stuff now with True Crime Obsessed for three years. I feel very confident, as I am the one editing the shows also, that I am very good with the structure of the show. A lot of the things are the same. We are very funny and laugh a lot, but we also care very deeply about the cases. We never victim blame or victim shame. One of the things we are trying to do, is that many of these cases have never seen solved. So, we are trying to be another opportunity to see the sun again. You never know who will hear an episode of the podcast, who knows something. That is a real thing that could definitely happen. So, you can definitely expect us to be loud and funny and very Broadway. But also, we take the cases very seriously as well as the medium of podcasting. This is not off the rails three-hour long episode. They are very structured, but they are fun at the same time.

Ellyn: We are both deeply sensitive people. A lot of these episodes are with parents recapping about their children and that does get us. We are finding laughter and humor in unsuspected places. I think that dichotomy works really well. We are not ignoring that these are sometimes sad situations but mostly wrapped up in detectives that have done things wrong or funny things about the documentary has been made. We are always going to find humor and levity in those moments.

Patrick: Yeah, it is definitely a different take. There are a lot of great missing persons podcasts out there that are very serious and straight forward and I love those podcasts too. But we have found a way to inject humor as a way to make these stories palatable and disgustable and I think we do a good job with that.

Channah: Each episode of ID’s Disappeared is between 40-45 minutes long, should we expect the podcast to be about the same length?

Patrick: We are figuring that out. What we want to be apart of the podcast is our decades of friendship without being that type of podcast that meanders into off the beaten path stories. As the editor it is a little bit of a tricky thing for me to figure out what to keep and what to cut. We will certainly be doing outtakes. Some of the stories told, we will find a way to make them mini or bonus episodes. I would say the episodes length would be 40-50 minutes that is what we are aiming for.

Ellyn: We are both also avid podcast listeners and the 45 minutes mark is a good spot that draws you in enough but doesn’t go on and on. Patrick has doing this way before True Crime Obsessed and has perfected making an arc out of the story.

Patrick: And if there is one thing, we learned from True Crime Obsessed is that people love the bonus material. None of it gets thrown away permanently. We will just find another way for you to hear it.

Channah: That was going to be one of my questions, will you have a Patreon that you can give the extra material on?

Channah: For those wanting to follow along at home will you be doing the series in order starting season 1? Or will you be jumping around?

Patrick: No, we are going to go straight through from the beginning. And as soon as the world goes back to normal in the world, we will be going live shows as well for this.

Channah: You two have been friends for over 20 years – what do you think that brings to this podcast that others just can’t compete with?

Ellyn: [laughs] The great thing about it is that Patrick and I are in such different worlds, he is more in the podcasting world and I am more in the Broadway world. We both come with a set of very loyal fans. I am so excited to dish about young Patrick to all of his fans. His fans love him so much and I am just ready with all the drunken stories and embarrassing moments.

Patrick: I think about making True Crime Obsessed with Gillian. We started making that podcast right after we met, and I didn’t know that Gillian was funny [laughs]. There was a bit of a learning curve getting to know her and which buttons to push or not push and with Ellyn I know all of that already. There is a deep level of knowledge and history and experience. It is really very sybiling-esque.  There is just a lot of history there.

Channah: Speaking of Broadway, I like to do a fun question – if each of you could pick your dream role on Broadway, what would it be?

Ellyn: I don’t think my dream role has been written yet. There are so many roles like Evita. You think of those parts and they are equated with such legends. You think of Evita and not think of Patti LuPone. So, I feel like I am fulfilling someone else’s dream. So, it is always a goal in the Broadway community to be involved with an original company of something. I have been in a bunch and I think it is great to make your own work. I think my part will be playing Ellyn Marsh in Ellyn Marsh: The Musical [laughs].

Channah: What do you want fans to know coming into this podcast?

Patrick: Just that I am the funny one [laughs].

Ellyn: And the skinnier one [laughs].

Patrick: I am in general hotter, that is all.

Ellyn: I think Patrick and Gillian perfected the comedy true crime podcast. We really break down more of the surrounding factors and by no means laughing at anybody remotely associated with the victim.

Patrick: We take the cases very seriously. We are looking to bring more awareness to it. It is very funny and you are going to laugh a lot but we take the crime seriously.