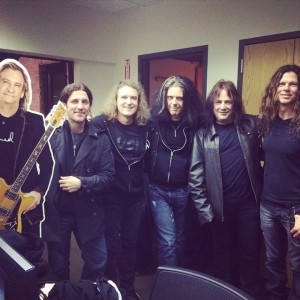 Dave Ellefson and Chris Broderick are probably best known for their work in Megadeth however over the past couple of months the duo have appeared as part of Metal Allegiance. The all-star group along with Ellefson and Broderick the group features Alex Skolnick, Chuck Billy, Frankie Bello, Charlie Benante, Scott Ian and a long list of others. The who’s who of metals top players performed their first show as a part of Motorheads inaugural “Motor Boat Cruise” this past month. Media Mikes spoke with Chris and Dave about the creation of the group, experiences from that first show and what they are most looking forward to about performing with the group here in the States in January.

Adam Lawton: Can you tell us how a group like this came together?
Dave Ellefson: Mark Menghi is the guy who put this thing together. Back when we were doing the Big 4 shows with Slayer, Anthrax and Metallica, Mark had put me and Frank Bello from Anthrax together for a couple of bass clinics. That developed into a couple shows put on by our sponsors called “Metal Masters”. After we finished those dates up Mark and I kept talking about keeping the concept of the shows together but develop a little bit further. “Motor Boat” was where the first real chance to try this idea happened. It was very last minute as there was a ccancellationby one of the headliners. I knew Chris and I were going to be there as was everyone else we had talked about so I called Mark right away. The show was really great and set a lot of what we are going to be doing in the coming months in motion.

AL: Was there any nervousness to get up their being everything was so short notice?
Chris Broderick: Absolutely none! (Laughs) I was so ready to get on that boat and just play. I thought the Metal Allegiance idea was great. It helped keep my ticket on the boat. (Laughs) We had such a great time jamming with everyone. Very rarely do you get an opportunity like this one to play with all these different guys. It’s a killer opportunity to play and hang out with some great people. I do have to say the only reservation I had was hanging out with Mark Menghi. (Laughs)

AL: What was it like performing a set that was mostly improvised?
DE: We usually start determining some sort of set list through an email thread. You can only imagine what an email thread made up of 12 metal heads looks like. Things get crazy quite quickly. At one point playing the “Love Boat” theme was mentioned. The cool part is that everyone involved is really talented and between all of us we can play just about everything. We of course throw in some of our band’s songs but we wanted to go back to playing some of the songs we grew up listening to and learning. Songs by Kiss, Deep Purple and Judas Priest were all mentioned. Of course the set changes from night to night and after the first night we did this we were having dinner with Alex Skolnick and we asked him to come up and do some songs. Alex brought in a whole bunch of songs he knew. Before we knew it we had the entire first side of Van Halen 1. Right before we walked on stage we all sat down at this little table and figured out what we were going to do. We are all like a bunch of kids when we get up there. It’s like forming a band and you keep adding all these amazing players. It’s fun to have those types of moments.

AL: Is there one guy who sort of runs the show when you are doing these type of shows?
DE: We default to Mark Menghi. He is sort of the voice of reason and sanity. When you throw a bunch of gun slinging, metal heads together it tends to turn in to one giant beer drinking brawl. Someone has to come in and make sense out of everything. You do really need that one guy to be the musical leader because I feel it’s important to stay within certain parameters. We don’t want this to come off as being too watered down so the music we do is all metal and hard rock. Its music fans of our regular bands might be into as a lot of them are our age and grew up on the same music.

AL: How does playing in a setting like Metal Allegiance differ from that of Megadeth?
CB: There is a lot more improvisation going on. We rehearse the songs on our own and then we just get up there and do them. When we go up there with Megadeth were doing the same songs night after night. It becomes almost like rope memory. With this you never know where everyone is going to be and there is a much freer flowing feel to things. Each performance is a onetime thing which gives you moments that can never be duplicated.

AL: Is this project something we could be seeing more of in the near future?
DE: Once we did the first show the phone hasn’t stopped ringing since. It’s going to be great bringing this show to the House of Blues to kick off NAMM. This type of group is perfect for these events. Outside of those bigger event settings promoters want us to do tour dates all over the world. Our bands separately would tough to get on one bill at one time. Metal Allegiance makes things a little more possible because you bring in the key members from these bands and we can just keep everything loose with a jam feel. The whole thing is about getting a specific vibe.

AL: With you guys being a part of NAMM will you be unveiling any new music equipment at this year’s shows?
DE: I have a brand new signature bass coming out called Kelly Bird 5. This is my 4th signature model with Jackson and lots of them have been rolling out which is really been great. The new model just came out and I am really excited for people to check it along with the other gear I endorse.
CB: I have a hard tail version of my Chris Broderick signature series guitar. This model is going to be offered through the USA custom series. I am not sure if it we will be completely ready by NAMM but it will be out the early part of 2015.

AL: Can you give us a quick update on the new Megadeth album?
DE: The plan is to go into the studio in January. Generally there is never a specific date we put on an albums release as we want to make sure the songs we choose are the best fit for our style. We have quite a bit of material to go through right now.