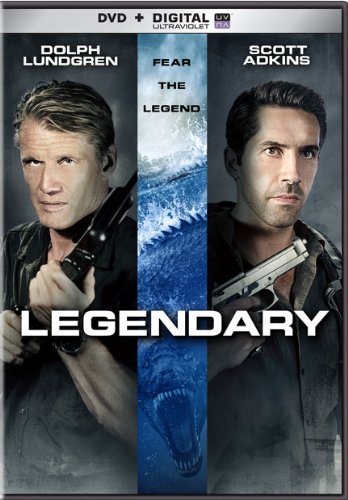 To celebrate the DVD release of “Legendary” with Scott Adkins and Dolph Lundgren, Media Mikes is excited to giveaway one (1) copy of the Blu-ray to our readers. If you would like to enter for your chance to win one of this prize, please leave us a comment below or send us an email with your favorite Dolph Lundgren movie. This giveaway will remain open until August 8th at Noon, Eastern Time. This is open to our readers in US and Canada only. One entry per person, per household. All other entries will be considered invalid. Media Mikes will randomly select winners. Winners will be alerted via email.

Prepare for an epic battle between man and beast when action stars Scott Adkins and Dolph Lundgren collide in “Legendary”. Directed by Eric Styles (Miss Conception, True True Lie), the action-thriller follows the battle between two rivals who capture a mythical creature that shouldn’t exist.

Travis Preston assembles his team for an expedition to a remote region in China’s hinterland, where a wild animal that the locals believe to be a primeval monster they call the “Shocate” is said to roam free. Travis’ nemesis, Jim Harker, a merciless trophy hunter, has already set up camp. A race against time ensues and Travis and his team have to pool all their resources if they want to capture this legendary creature alive…

Dolph Lundgren has always been one of my favorite action stars. Whether he is kicking ass as Drago in “Rocky IV”, Andrew Scott in “Universal Soldier” series or most recently as Gunner Jensen in “The Expendables” series – where he goes the action follows.  His latest film is called “The Package”, which puts him head-to-head with wrestling legend Steve Austin.  Media Mikes had a chance to chat with him about this film as well as his upcoming TV series “Rescue 3” and plans for “The Expendables 3”.

Mike Gencarelli: Tell us about about how you got involved with “The Package”?
Dolph Lundgren: As usual you read the script and then talk with the director. I liked the script because the character they thought about for me was interesting. He was a little more colorful, kind of crazy and unpredictable.

MG: What is your technique for getting into a character like The German?
DL: A lot of it if you good script is usually done for you. They have explained in the script already that what he looks like, in this case, the fact that he is dying from a disease and is becoming desperate but at the same time he is becoming educated and has a way with words. So you just work with the material and put that into the different scenes. By working on the scenes then you come up with ideas like make-up and clothing ideas. When you are on the set also a lot of it comes from working with the other actors and the director while shooting. The more colorful the character is the better described he would be in the script and that would make it easier for an actor to fall into that role.

MG: How was it going head-to-head with Steve Austin?
DL: It is always fun to work with other actors who can fight. I have done it a few times now with Jean-Claude Van Damme, (Slyvester) Stallone and Randy Couture. So with Steve Austin it is the same. He is a guy that doesn’t need a stunt double. You get to do more on the film with the actual performer, so it is fun and also it looks better in the film.

MG: What do you enjoy most about being an action hero and how has that role evolved for you over the years?
DL: I think it stayed the same for quite a long time. “Rocky IV” was my first big movie. I didn’t really plan to be an action hero, I just wanted to learn about acting. I was doing some modeling also at the time and before that I was an athlete and studying engineering. So this kind of came out of left field. So after “Rocky IV”, I think it stayed the same for like 20 years. I also lived in Spain for about 10 years to bring up my kids away from Hollywood. I got divorced a few years back, so when I came back here in 2009, I got right back into the role and did “The Expendables” and then “The Expendables 2”. Now I am trying to find roles that are a little more interesting and fun to show different sides of myself. Let’s see how that goes. I am doing a action series now for television. It is more about rescuing people than killing then [laughs], so that would be new for me.

MG: What can you tell us about that show?
DL:  Sure, It is called “Rescue 3”. It is based on this elite multi-agency task force in California which saves people. I play get to play the leader of this unit. What is interesting is that you’ve got 20 episodes to develop the character instead of 90 minutes. It is going to be fun to see what kind of things I can pull out of that and how the audience will react to it. Also one of the producers is from “Baywatch”. I am not sure how much running on the beach I will do…but we will see…hopefully not too much [laughs].

MG: Playing such iconic character like Drago in “Rocky IV”, Andrew Scott in “Universal Soldier” series and now Gunner Jensen in “The Expendables”, what has been your most memorable role in your career?
DL: I always remember “Rocky IV” since it was my first film. It has a lot of memories attached to it. The same with “The Expendables” since it has such a great cast, its special. I am back with Stallone again. I think those are the two that really jump out and have been a big milestone in my career. Then I have done some small roles recently like “The Package” have been a lot of fun.

MG: Also last year you did a film called “One in the Chamber” that I enjoyed as well.
DL: Yeah, thank you! That is another one that I kind of took out the turns a little bit. I did another project that is a similar smaller part last year called “Rush” with Randy Couture. Now that I have this TV series coming up, I am trying to play more roles that are I would say are a little more “normal” and close to myself. Since that is what I am doing in the series, so I am trying to get used to that a little more.

MG: Speaking of playing different roles, I loved your character recently also in “Small Apartments”. You got to do more comedy because you were a riot.
DL: Thanks man! I actually have this reality series coming out this June called “Race to the Scene”. The show is based on actual movie locations and memorable movie scenes. It is going to air on Reelz. It is very comedic for me and is like one big skit. So we will see how that works out also.

MG: Any update on your next directorial effort “Skin Trade”?
DL: Yes, I am still working on that. It is something I wrote a few years back with a friend of mine. I am trying to work it into the schedule. This year is very busy with the series and then possibly another “The Expendables”. I am trying to find the right co-star. I wanted to direct it, so I wrote it to play the co-lead. But the lead, the main character I want to cast somebody. So that is the guy that I am looking for. I am sure it will work itself out soon and we will find somebody.

MG: You mentioned “The Expendables 3”, can you shed any light on it?
DL: Nobody has approached me but I have just heard little things like they were working on a script and aiming to shoot in the Fall. But I do not know any particulars right now. I think within two months or so it should be all settled since they have to prep by June the latest if they are looking to start shooting in September.