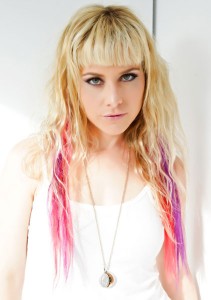 Meital Dohan is an Israeli born actress/musician. She has a recurring role on the series “Weeds” and has appeared in a variety films and television shows. Meital recently released her first music single titled “Yummy”. Media Mikes had a chance to talk with Meital about the single and her career in the entertainment industry.

Adam Lawton: What was it like working with Rami Afuni on your single “Yummy”?
Meital Dohan: It was great. I don’t see how working on music could ever be a bad experience. I have found that there is a connection and or vibe that happens when you are working with a producer. That’s what happened with Rami.

AL: What was your first recording experience like?
MD: Most of my career I have been an actress so recording is still somewhat new to me. It still keeps me intrigued and involved the same way acting does. I thinks it fun discover a new character. On the music side the fact that I am singing really surprises me.

AL: What made you decide to venture into music?
MD: It wasn’t so much a decision. I had been in shooting a version of “Dancing With the Stars” overseas and my spiritual guide told me that I had to return to America to work on music. I thought she was completely insane as I am an actress. She assured me things would work and I had worked with her for a few years so I trusted her. I came back and started working on the album. Everything has moved really fast and it’s been fun.

AL: Have you found either music or acting to be more difficult than the other?
MD: I really love both. Acting is something I have been doing since childhood. I have been on so many different stages that it is part of me. Singing is like a magical world that opened up and took me by storm. Music has a very different vibe. As a singer everything is up to you.

AL: Can you tell us about the album you are working on?
MD: The album is going to be titled “I’m In Hate With Love”. I am still in the recording process as we speak. I am working with some interesting producers and the whole thing is very exciting. We don’t have a set release date yet for the album as we are focusing right now on the single “Yummy”. That song has a real life to it. I have a couple shows booked around that song. Once we finish riding the wave “Yummy” has created we will release the next single.

AL: What do think has been the hardest part of breaking into a new market both as an actress and singer?
MD: I never really try to compare myself to anyone else. I think life is a journey that we have only so much control over. I had a great career in Israel and a great audience that I love. When I came to the states and wanted to go back something always happened that kept me here. I know I have a lot of fans that believe in me and want to see what I am doing. I don’t think it’s my job to worry about what and if something is going to happen. It’s the job of an artist to service the people they entertain.

AL: What other upcoming projects do you have coming up?
MD: I have a new television series in negotiations but I can’t really elaborate too much on that. The show will probably connect somehow to my skits online. There also are a few movie opportunities out there however the television series is my focus right now.