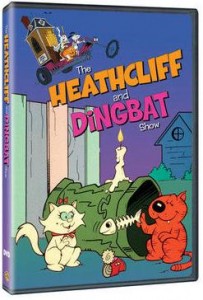 I grew up watching “Heathcliff”.  The first season of the show back in 1980 was called “Heathcliff and Dingbat”, which ran for 13 episodes.  It was really run revisiting the show, which is still sharp and funny.  Plus, who doesn’t love to listen to Mel Blanc, the man of 1,000 voices, do what he does best and given Heathcliff his trademark laugh.  Warner Archive is behind this great DVD release.  Once again they have delivered a great classic 80’s cartoon to DVD for the first time ever!  I hold this series very close since I grew up on it.  I am more excited to now be able to share my childhood series with my own daughter now.

For a show that is over 30 years old, it still looks sharp.  The colors aren’t as crisp as they could be sure this isn’t a HD Blu-ray release, so for what it is worth it looks great.  The show is presented in 4X3 full frame within its originial aspect ratio of 1.37:1.  The audio included on this release is an Dolby Mono track. After watching 13 episodes, I was craving for more.  I hope that Warner Archive is considering to release the following seasons of this show as well, like “Heathcliff and Marmaduke”.  This is a must for all fans of classic animation or Saturday morning cartoons.

Premise: The sassiest, frassiest, classiest cat, Heathcliff, jumps from the comic strip to the TV screen in the first of his animated adaptations and is joined by the silliest trio of monsters ever seen, the aptly named Dingbat and the Creeps. The feline half of the show is pure classic Heathcliff high jinks, with the highfalutin’ low-livin’ tomcat living the life while romancing Sonja, avoiding the dog-catcher and tormenting Spike. And as an added soupcon of catnip, Heathcliff is voiced by the legendary man of 1,000 voices, Mel Blanc! Meanwhile, a dog heads up the second half, but this is no common canine. Dingbat is a vampire dog, who with fellow Creeps the fat skeleton Sparerib and teamleader Nobody, a talking jack-o-lantern, makes up the strangest service biz ever seen, Odd Jobs, Inc. So grab a seat and get ready for the funniest antics this side of alleyway and graveyard in this complete 2-Disc, 13-Episode collection.