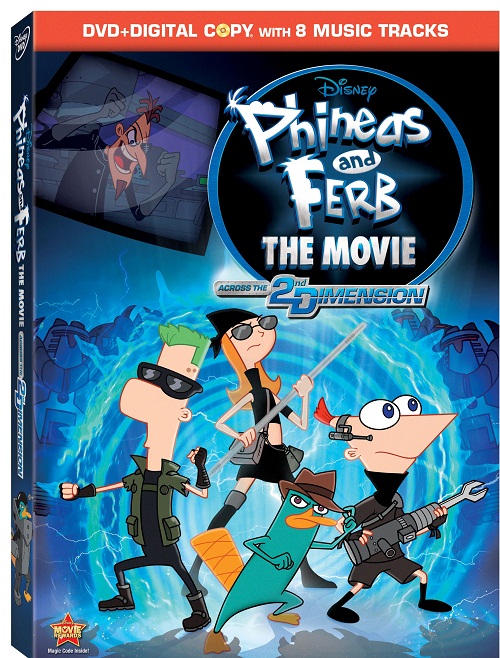 Just when you thought Phineas and Ferb had done it all (including winning an Emmy(R) Award), they take their adventures to a whole new dimension in their first full-length movie — PHINEAS AND FERB THE MOVIE: ACROSS THE 2ND DIMENSION — featuring exclusive deleted scenes and all-new bonus only on Disney DVD! When Phineas, Ferb and Perry follow Dr. Doofenshmirtz through his “Otherdimensionator,” they find themselves in an alternate universe where a second, truly evil Dr. Doof rules over his Tristate Area with an army of iron-fisted robots. To save his friends from certain doom, Perry makes the ultimate sacrifice by revealing his secret identity as Agent P. Phineas and Ferb escape, meet their 2nd dimension selves, and begin their own mission to rescue Perry. So begins an epic battle as our heroes try to save their home from the clutches of Evil Dr. Doof…and his sidekick Platyborg! Will Evil Doof succeed and achieve dual world domination? Will Candace finally bust her brothers? Find out in this action-packed, epic adventure — so huge that it crosses over time and space!

To celebrate the Disney release of “Phineas and Ferb The Movie: Across the 2nd Dimension”, Media Mikes would like to giveaway 10 copies of the Blu-ray™ Combo Pack (Blu-ray™ + DVD). If you would like to win one of these great prizes, please leave us a comment below or send us an email and let us know your favorite character from the show. This giveaway will be open until Tuesday August 30th at Noon, Eastern Time and is only open to residents of the United States. Only one entry per person, per household; all other entries will be considered invalid. Once the giveaway ends, Movie Mikes will randomly pick out winners and alert the winners via email.