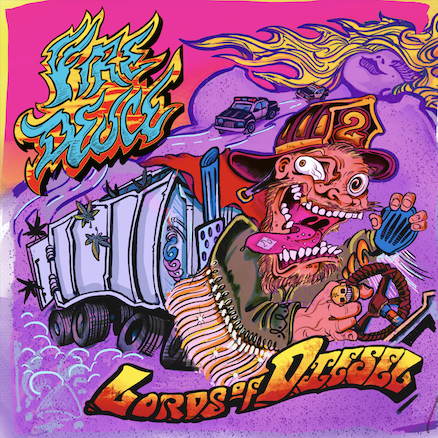 Stop me if you’ve heard this one before. Florida Man is arrested for disorderly intoxication and lewd acts with historical statues.

While originally hailing from New Jersey, FIRE DEUCE frontman Cleveland Stever has become an honorary member of the infamous “Florida Man” alumni whose esteemed members include the guy who killed his imaginary friend, the guy who called 911 after his cat was denied entry into strip club and the guy high on flakka who broke into jail to visit friends. Stever joins the ranks after waking up in a Tampa area jail cell for dangerously excessive drinking and defiling a monument. Fueled by the reckless pounding of White Claws combined with unrelenting humidity, an embarrassingly impressive lack of self-control and as he states, “for being too goddamn patriotic,” Stever finds himself at the wrong end of the law, and as a result has to raise bail money before he’s shanked.

Facing time in the slammer and increased pressure from the suits at his record label to recoup their money he spent on White Claw, Stever has abandoned all self-respect and what’s left of his dignity for his next record. Knowing firsthand that playing metal and rock pay squat these days, he’s revived FIRE DEUCE and is jumping on the country-pop bandwagon.

Today, FIRE DEUCE has released a video for his first single, appropriately named, “White Claw,” which recounts both Stever’s love of that sweet, sweet hard seltzer and his misadventures that landed him in all this bullshit in the first place. View it now before the cease-and-desist letter is sent. The audio single will be available on all streaming services on November 29th.

FIRE DEUCE’s new EP, Lords of Diesel, will be released on January 10th. Pre-order for the EP will launch on Friday, November 29th at www.EvilInk.com.