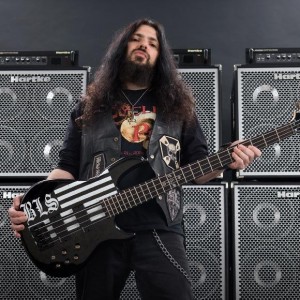 John “JD” DeServio is the bass player for the heavy metal group Black Label Society. The band is currently on the Epitaph tour which is also featuring Judas Priest and Thin Lizzy. Media Mikes had a chance recently to talk with JD about the tour and what the band has in store for the rest of 2011 and into 2012.

Adam Lawton: How did you originally get involved with Black Label Society?
John DeServio: I had known Zakk before he joined Ozzy Osbourne. We have been brothers for a long time and we were always jamming and hanging out. I came in back on the “Pride and Glory” tour which was with Aerosmith were we got to tour Japan. That was just amazing. Zakk put Black Label Society together in 1998 and he asked me to do it. I was there until 2000. I had decided to split and do my own music for a bit. I was playing in wedding bands and doing whatever to make money but I just really wanted to make my own music and get better at playing. I also played with Richie Kotzen for about 6 months prior to rejoining Black Label Society.

AL: What were your initial thoughts when it was announced you would be touring with Judas Priest?
JD: It was awesome! We were totally blown away. I grew up listening to those guys and I never thought I would be getting the chance to play with them every night.

AL: How have the shows been thus far?
JD: The shows have been great and everything has been really good. We play an hour a night and the fans have been awesome. This tour has exposed us to some new fans which is always good for us.

AL: have there been any highlights of the tour so far?
JD: I think every day has been a highlight. Being on stage and getting to listen to Judas Priest has been pretty cool.

AL: What can you tell us about the Black Label Society Christmas EP?
JD: The EP has a few Christmas songs played by Zakk and I think it’s a cool idea. We just love to play and Zakk did something similar to this on our last EP which had “The First Noel” on it. This EP has a full Christmas motif to it.

AL: What can you tell us about the upcoming tour with G N’ R?
JD: That will be coming up right after our run with Judas Priest ends. The shows are going to be mostly arenas which are always a lot of fun.

AL: What do you think your greatest musical accomplishment has been thus far?
JD: Tour all this time with Zakk has been an accomplishment in itself. (Laughs) It’s all been great. When I was younger I had the chance to play Madison Square Garden which for me growing up in that area was a big deal. I was playing with Vinnie Moore back then and we opened two nights for Rush. There have been so many great things that have happened over the years.

AL: Is there any place that you haven’t played yet that you want to get to?
JD: I would love to make it over to Israel and the holy land. I have had friends go over there and play who have said it was an experience they couldn’t explain. I think Egypt would be really great as well. China would be another place that I would like to play as well

AL: What other projects do you guys have coming up this year and into 2012?
JD: I have a few bass clinics scheduled for this year. I generally try and schedule those during every tour we do. I went to Berkley College of Music where I learned a bunch of stuff outside of just Heavy Metal. It’s cool for me to get to show off on some other types of music. Hopefully the clinics will open up some ears and inspire a few people. On this run of clinic I have been doing some stuff with Thin Lizzy’s bassist Marco Mendoza and our new drummer Chad Saliga who used to play for Breaking Benjamin. Those guys have been playing along with me so it’s been great. My band Cycle of Pain who released an album back in 2009 is currently writing a new album and we hope to get that out as well.