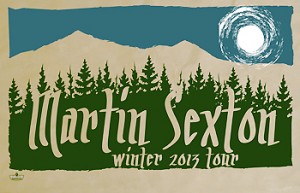 [NOTE: Credit must given where credit is truly due.  The review that appears below was written by my good friend, Denise Dean, a longtime Martin Sexton fan (to put it mildly). She accompanied me to the FTC show so that I could better understand Martin as a performer and as a person. After the show, it became clear to me that it would make much more sense if we switched roles – she would become the main writer and I would assist as editor. Thanks for taking the lead on this one, D! – Dave P]

“Oh please, it’s not really going to be that bad. Weather men have worse odds than major league hitters these days.”

Man, did I eat my words.

On February 8th, a massive nor’easter buried New England’s section of I-95 and all roads leading to and from it under feet of snow. It also postponed the Martin Sexton show scheduled for the following night at FTC in Fairfield, Connecticut. Lesson learned: mock Mother Nature, and you will pay. However, the rescheduled performance on March 28th was well worth the wait.

If you have never been to a Martin Sexton show, quite simply, go. His live concert recordings give you a taste of his true talent, but even they pale in comparison to being in the same room with the power of his actual voice. Sexton has a range from the absolute top of the scale, strong, and angelic, all the way down to a gravelly-bluesy drawl, and he’s able to race up and down octaves with bewildering ease.

Fairfield’s FTC is a bare-bones, very small, and very intimate venue – one where all of the audience’s attention will be focused on the art of the performer. It is a space reserved for the brave where the artist can’t hide behind a fancy light show or special effects. And, given that Sexton’s shows frequently feature him on stage with only a bottle of water, a towel, and a guitar or two, he seemed right at home. As Martin himself quipped, “It’s like I’m just hanging out with friends, playing in my living room.”

The first part of the show was an all-acoustic set that frequently electrified the house with its quiet power. He opened with “The Way I Am”, a self-reflective a story of a distraught elder realizing that he’d made for himself quite an unlovable life. However, as is what often Martin’s way, the man proclaims he will just “change the way I am.” In the appropriately named “Happy,” he names the moment he can finally own this new ‘life is good’ feeling – and we watched “happy” dance across his face. He moved on with “Glory Bound,” which alludes to his own story of a 20-something kid leaving his real job, grabbing his guitar, and heading for Harvard Square. “Making the mistake he’s got to make,” he pops his case open, plays his heart out and waits for that first dollar. The lyric is solid testimony to the fact that, from the start, Sexton was firm in his faith that he was destined for greater good.

Upbeat, faster-paced songs often elicited mass audience participation through foot stomping and hands clapping. Martin had to rein the crowd in, cautioning that they would ruin the acoustic vibe, promising that the wilder stuff was to come later in the second set. He knows his craft and is passionately committed to giving his fans an amazing set, and will accept nothing less than perfection.

After a short break, he came out with his electric guitar in hand, and kept the crowd awestruck under his spell for almost two more hours. He danced around the stage, played beat box on his guitar, and trumpet, snare drum, and high hat with his voice box. Unlike the first set, he often invited the audience to join in: to sing the chorus, clap their hands, stomp their feet, snap their fingers – and make the show a shared journey. Martin was clearly convinced that he had excellent travel companions, telling his gathered disciples at FTC that if “amen” and “hallelujah” could be sexy, their chorus hit the mark. Since his earliest days, he has always invited the crowd in, and feeding off the energy he elicits, he seems to dive deeper into each song right before their eyes.

Riding the rollercoaster of his experiences was thrilling, and all over the map. Martin’s music is pure emotion, and song by song, he showed the steps and the missteps he’s made throughout his life, instantly connecting to us on a most human level. We watched the unforgiving tale of heartbreak after playing with the fire of your drummer’s girl in “Gypsy Woman. “ We followed him deep into the raw pain of self-questioning in “Where Did I Go Wrong?” a song that he admitted was perfect for FTC’s intimate space, and felt the torment caused by that unforgettable gal in “Can’t Stop Thinking ‘Bout You.” Interspersed between the tales of despair was the toe-tapping, “13 Step,” a classic tale of fine food on the road, “Diner,” and the funky, sex-charged “Boom-Sh-Boom ” and “Beast in Me.” Marty pulled out all the stops and treated long-time fans to all their favorites, often at the request of the loudest shouter in the room.

On this night, he wound down his curtain call with “America” reminding us of the good of our nation, but he left us with his rendition of Buffalo Springfield’s “For What It’s Worth.” This was no accident.

Every time Sexton opens his mouth he captivates his audience with his power, his passion, and his mean and soulful guitar playing. And Sexton’s lyrical genius has true staying power…especially when you realize what he’s actually SAYING.

Martin has always asked the listener to reframe life as a journey. His two-plus hour show showcased his own journey to peace: the good and the bad, the funny and the tragic, the pain and the glory. With his genuine humility, Sexton presents his challenge. He reminds us that life is a colorful tapestry of experiences, and that it is our duty, as residents of this great nation, to learn from each step and, furthermore, that we hold up a mirror, see who we are, and then, with our eyes wide open, “look what’s going ‘round.” And then we must stand up and do what’s right.

Sexton uses his voice to encourage us to find ours, to use it to do good, and to “spread peace all ‘round this world.” Maybe if we fused all of our voices together, they could be as strong as his. Marty’s voice is truly inspirational and, for that, we send peace and love right back ‘atcha, brother.