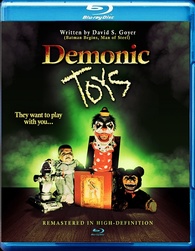 When I think of Full Moon, I think of cute yet very deadly creatures reigning terror. Whether it is puppets, gingerbread men or kids toys. “Demonic Toys” is a great entry in Full Moon’s films of the 90’s. Baby Oopsie Daisy, Jack Attack and Grizzly Teddy are a few of the character this film swamped. They have been reprised in various future films including spinoffs “Dollman vs. Demonic Toys”, “Puppet Master vs Demonic Toys” and sequel, “Demonic Toys 2”. This film is not perfect but it is a classic 90’s horror film and this is a must purchase for any Full Moon fan!

Official Premise: They’re cute and cuddly by day, lethal demons by night. Ruthless killing machines come alive for just one purpose…death. And for five adults in an abandoned warehouse, every child’s worst nightmare has become a deadly reality. While on a stakeout, Judith Gray (Tracy Scoggins), a beautiful, tough cop, is trapped inside a warehouse full of toys. But these are no ordinary playthings they have been awakened to murderous life by a strange child of darkness, “The Kid” (Daniel Cerny). Each toy feeds on blood: Jack Attack heads straight for the throat; Grizzly Teddy is not afraid to show its claws; and Baby Oopsie Daisy is truly to die for. Now it’s up to Gray and a passing delivery boy, Mark Wayne (Bentley Mitchum), to stop the deadly, DEMONIC TOYS!

I have to be honest, I wasn’t really expecting a crystal clear 1080p transfer for this title. What we got though was a bit of a let down personally. There was quite a bit noise and the transfer shows its true age. It is still a step up from DVD release but I think they could have done a little more in terms of cleaning this up. The same goes for the audio track, since there is only a Dolby Digital 2.0 track included for me that screams DVD not Blu-ray. The only special features included are an original VideoZone episode and a few rare trailers.