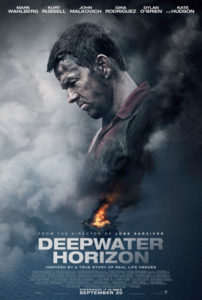 Over six years ago, the Deepwater Horizon explosion triggered the worst environmental disaster in U.S. history. Since then, BP has agreed to the largest corporate settlement in history, to the tune of nearly $19 billion in fines. The economic impact to the Gulf Coast was even higher, with estimates around nearly $25 billion, but it could easily be higher than that. Outside of the financial realm, thousands upon thousands of different animals and even hundreds of people on land suffered adverse health effects. As daunting as those numbers are, nothing cut’s as deep as the loss of a brother, father, or son, that 11 different families experienced on April 20th, 2010.

“Deepwater Horizon” covers the complicated 24 hours that led up to the explosion on the floating football field sized oil rig quite well. The movie mainly follows Mike Williams (Wahlberg), the Chief Engineer for Transocean. Transocean is a foreign property that actually owns the rig. The oil castle is on lease to BP, despite BP’s best attempts to run it like it’s their own. The petroleum palace is over one of the most difficult oil and gas prospects in the Gulf, the Macondo Prospect. Upon Williams’ arrival, the well is about to be filled up with a cement plug. But there’s a problem.

BP, constantly reminding them and the audience that the rig is behind schedule, isn’t concerned about doing the best job of creating or testing the cement plug that’s about to be put in place. They’re ready to clean up and move on to the next vast oil prospect. “Deepwater Horizon” paints the BP officials on-board the rig as nefarious penny pinchers, but in this case the pennies are hundreds of thousands of dollars. After a couple rounds of testing, the cement plug appears to be good enough for BP. , And against the beter judgement of Deepwater Horizon Manager Jimmy Harrell (Russell) and his crew, they go along with it. Sadly I think you know the rest.

While Berg spends every chance he gets making the audience loathe the slimy BP execs, he manages to humanize the people we encounter on the rig. While BP acts like they’re individual cogs to the massive machine that is the Deepwater Horizon, Berg shows them act more like a family unit. Like most co-workers in tight confines, they surely get on each other’s nerves, but the ebb and flow of the environment’s safety keeps them tight. Safety is the biggest component of survival and outside of the jokes, jabs and scowls, this crew ensures everyone stays safe and out of harm’s way.

The absolute panic and mayhem that takes over when the rig finally explodes into a massive fireball is intense to watch. This isn’t like most disaster movies where people complete inhuman feats of heroism to escape, this is blue collar men and women finding a way to survive in a scenario none of them were trained or prepared for. There are plenty of moments where characters express their deep despair at the situation, exclaiming through tears that they’re going to die. The media coverage of this event over half a decade ago was focused more on ecological disaster that it was and is still is today. We never got that human aspect as much and this movie is a tragic window into what happened in the span of a couple of hours.

Berg’s last movie, “Lone Survivor,” was a bone crunching look at how survival isn’t brave or courageous, it’s absolutely terrifying. “Deepwater Horizon” is the exact same, but instead of a warzone populated with soldiers, ordinary folks are dodging flaming debris, shrapnel from exploding metallic piping, and pushing broken bones back into place. Despite what the advertising says, “Deepwater Horizon” isn’t a movie with a hero that comes in and saves the day. These people saved themselves and they don’t feel like heroes, they feel survivor’s remorse. They wonder what they could have done differently to save their friends or stop the explosion.

Berg displays the heartbreaking range of emotions and his cast is able to reflect that without skipping a beat. Because many of us aren’t familiar with the names of those that were lost that day, there’s a decent amount of uneasiness about when someone could die or if they will die. For those who want to know what horror happened the night the Deepwater Horizon rig exploded, this movie captures it to near-perfection.