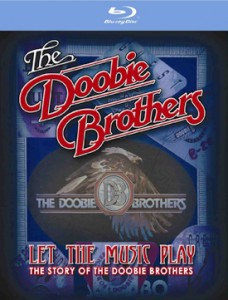 With a career spanning over 40 years, over 40 million albums sold, and 25 band member line-up changes, the Doobie Brothers are a band that’s a ripe subject for an amazing documentary that chronicles their highs and lows and downs and outs. Unfortunately, “Let the Music Play” isn’t that documentary. While it does satisfy the prerequisites through band member interviews and archival footage and stills, it doesn’t really grab hold of the reigns and become something that is completely engaging or memorable.

The film establishes its pattern from frame one: talking head > concert footage/stills > repeat. While the stories each of the Doobies tell are fairly interesting, there are constant and tedious refrains of self-praise (“This is a band that could play anything!”) and stories of how a relentless recording and touring schedule burnt out so many members of the group. It’s pretty cut-and-dry stuff and, as a result, “Let the Music Play” never ascends above the level of a “Rockumentary 101” student’s final project.

How could the documentary have been a better one? For starters, the interview questions could have been a lot more probing and elicited more personal responses that shine a light on the band’s soul. We don’t get to hear any anecdotes or specific “There was this ONE time on the road…” stories that often make band bio films fascinating. It would be one thing if the Doobies were fairly droll individuals who weren’t articulate and interesting to listen to, but that’s far from the case. Throughout the entirety of “Let the Music Play”, we keep waiting for those stories that probably could and want to tell – the ones that we’ll remember after the end credits have rolled – but they’re never delivered.

The filmmakers would have done well to borrow some well-established motifs – and dare I say clichés – that are constantly used in the myriad of “making of classic rock albums” docs that have been released over the past decade. Legendary producer Ted Templeman factors into “Let the Music Play” quite frequently, shedding light as to what working with the Doobies was like, and accurately describes them as “Crosby, Stills, Nash and Young with leather jackets”.Given this, why not put him behind a mixing console so he can play some of the individual tracks from the multi-track studio mixes to highlight some of the three-part harmonies that made songs like “Black Water” unique and classic? It’s a huge missed opportunity that could have added the type of depth that the film as a whole lacks. And what about all of those guitars we see behind each of the guitarists while they are being interviewed?  Why not let them play them from time to time to demonstrate how some of the classic licks that the Doobies are famous for were created? Pat Simmons has a guitar in his lap whenever he’s talking to the camera!  Alas…another missed opportunity.

Perhaps the biggest shortcoming of “Let the Music Play” is that it really doesn’t let the music play much at all. It would be one thing if footage of great performances were scarce but that’s clearly not the case given that the disc’s sole extra is 48 minute worth of live performances. The nine tracks that comprise this bonus feature are presented chronologically and span a wide range of the years from longhair to mullet to grey. The opener, “Rainy Day Crossroad Blues”, shows lead vocalist and guitarist Tom Johnston and a handful of his band mates gathered in a circle around a hotel’s outdoor pool area. A single camera on a tripod captures Johnston chunka-chunking away at his acoustic guitar and singing the lyrical sections that he’s already come up with for the song and humming the rest. It’s a stop-and-start affair full of trial and error, but the net result is that we get front-and-center seats to see the miracle of life as a new song is born. Even though this home movie clip runs a mere four minutes, it’s more fascinating that the entirety of the 100-minute documentary that it’s been tacked on to. Adding it and a couple of the other live footage clips to the film would have allowed “Let the Music Play” become something special and worthwhile.

It’s a shame that the film falls so short of being the definitive documentary about a band that is so proficient and significant and whose music is often timeless. “Let the Music Play” should, when inhaled, provide a great high but, instead, only delivers a disappointingly weak buzz.