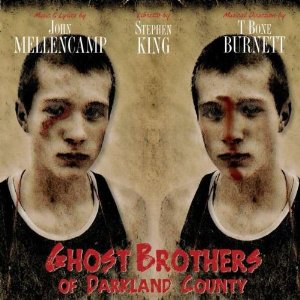 “Ghost Brothers of Darkland County” is a very unique release. It comes from the great talented minds of Stephen King, John Mellencamp and T Bone Burnett. It was originally a musical stage performance, which was performed in Atlanta in April of 2012. So what is this actually? It is a libretto of the acclaimed Southern Gothic supernatural musical. It is a mix of dialogue tracks, written by King with music by some amazing musicians including Elvis Costello, Neko Case, Sheryl Crow, Ryan Bingam, Kristofferson and Rosanne Cash…just to name a few. Costello and Kristofferson also take on characters in between the songs, along with Meg Ryan, Samantha Mathis and Matthew McConaughey. Can you believe the talent attached to this! It is very well put together and draws you in just like one of King’s novels.  The music is seamless with the dialogue and together they really create a creepy atmosphere.

Official Premise: Set in the tiny town of Lake Belle Reve, Mississippi, the Ghost Brothers’ story centers on two sets of brothers: the ghosts of Jack and Andy, dead in an apparent murder/suicide, and their nephews, the living Frank and Drake, who seem to be headed toward the same downward spiral as their uncles. Joe, younger brother of Jack and Andy, father of Frank and Drake, has decided it’s time to reveal his own terrible secret at the site of the tragedy, before it’s too late.

This deluxe edition comes with a two disc set, one CD and one DVD.  The DVD contains a bunch of great behind the scenes content and features the songs and interviews with Stephen King, John Mellencamp, and Musical Director, T Bone Burnett. The following three featurettes are included “A Look Behind Ghost Brothers of Darkland County”, “Truth In Studio” and “Libretto”. The DVD also comes with a digital copy of the libretto.  There is also a pamphlet included with the set for an MP3 download of just the music. I was also impressive with the fact that this deluxe edition also comes with the complete lyrics and script from the CD tracks…and it looks very sharp as well. I highly recommend this for country music fans and of course the words of the great Stephen King.