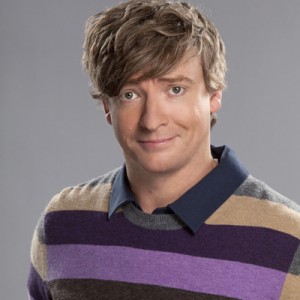 Rhys Darby is known best for his role of  Murray Hewitt in “The Flight of the Conchords”.  He is currently starring with Kevin Dillon and David Hornsby in CBS’s new comedy “How to Be a Gentleman”.  Media Mikes had a chance to chat with Rhys about his new show and also his stand up work.

Mike Gencarelli: Tell us about your new show “How to Be a Gentleman”?
Rhys Darby: It is basically about the ultimate gentleman Andrew, played by David Hornsby. He is in his mid-30’s and bit of a loaner. He is obsessed with gentlemanly etiquette and old fashion values. He ends up befriending an old school chum, Bert, who is played by Kevin Dillon, who used to give him hell at school and bullied him. Bert is running a gym and these two end up being friends when Bert takes Andrew on as a client at the gym. They form this odd couple kind of relationship since they both have something the other one needs. One doesn’t have any idea about gentlemanly etiquette and the other needs a good kick up the ass when it comes to being a man.

MG: Give us some background on your character Mike?
RD: Andrew’s sister Janet, played by Mary Lynn Rajskub, has hooked up with me and married this New Zealander. We met in the Chicago Technology and Science Museum, without giving too much away. She falls for my charm. Don’t ask me why I am working in the Chicago Technology and Science Museum [laughs]. I guess I came all the way to America since New Zealand have limited resources with museums. It is a young country and anything in the museum are only about 10-15 years old [laughs]. So I am living the dream and end up in there family. It reminds me of “Happy Days” a little bit since every week we have dinner with Andrew’s mom. My wife Janet is the domineering wife and I am put in my place a bit. Since it is the first season we are exploring the relationship and how things fall into place. In the pilot, I am a little brough beaten but I find my place and get a bit of balls and that is helped out by Kevin’s character. I sort of piggy back off Andrew’s advice and ends up helping me out as well.

MG: How is the production going so far? Any notable moments for the first month of shooting?
RD: It has been going really well. The first thing that we noticed that not only did we have a really good cast but we all got on really well. It really did feel like a family. I just love the cast. From there we are like seven episodes in now and we are just enjoying it. Our relationships are getting stronger and it has been a real blast. The easiest thing about it is that the writing is really good. So hopefully we are going to have a little hit on our hands here.

MG: How does working on a show like this differ from “The Flight of the Conchords”?
RD: It is very different for me. It is a big studio sitcom with lots of sets and multi-camera situations. I am sort of more used to run by the strings of your pants, one camera, making it up as you go along situations. But I bring that background that I have to this and I do a bit of ad lib here and there.  They actually let me do it, so I am rejoicing that. I got the advantage because I am playing a character from a different place and only I know how I would say some things [laughs]. It has been cool.

MG: What do you look for in a character that makes you want to jump on board?
RD: Well, definitely something challenging for me. Comedy is my forte. I like to do what is on paper but then be able to take it even further. I am all about making something as funny as it can be. I come from a stage background where I do physical comedy and stand-up. In “Conchords”, we didn’t have an audience and no one was allowed to laugh on set. It was all about the awkward moments and pauses. Coming into this show now, there is laughter and we have to pause for jokes, it is new for me.

MG: Besides acting you have a stand up routine, what do you enjoy most about it?
RD: Definitely the instant laughs you get and if something is an instant hit. You can think on your feet more and that is something I like to do. Rather than just having a few lines…by that I don’t mean coke [laughs]…I mean script [laughs], learning them two days prior and then doing them once. I rather learn the lines just before hand, have it fresh and have the ability to add to it. In stand up, the way I write my material is to write it out word for word like it is a novel, then read it over once and just go out there. It is very organic, it goes brain to paper…to paper to back to brain…and then out to the ear. It is a three-step process. Things evolve when you are doing stand up man and I really love it.