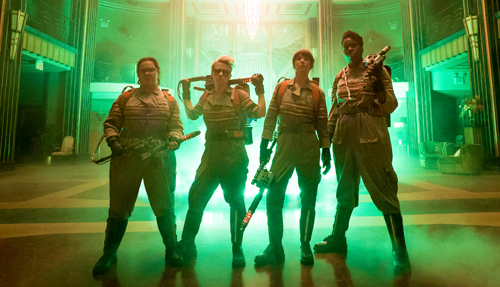 There seems to be a whole lot of doubt swirling around a possible sequel to Paul Feig’s Ghostbusters. Sony came out of the gate proclaiming its green light but when the feature didn’t set the box office absolutely ablaze, detractors flocked to the numbers as validation for their months’ long rally against the very notion of the reboot, sight-unseen. Sony is still keeping mum on their plans, although they maintain the brand is strong with cross-platform opportunities. I’m not here to argue numbers, especially in a summer where other properties have had the privilege of quietly underperforming on a near-weekly basis from Independence Day: Resurgence to Star Trek Beyond.

All I’m saying is I have a feeling that once the paranormal dust settles and we head towards its home video release and secondary markets, the word will get out that Feig’s Ghostbusters is actually a damn good time. We’ll see this word spread by the enthusiastic little girls–oblivious to the internet furor– who saw new kinds of heroes in the unconventional quartet and take to ghostbusting on the playground. We’ll see it in the array of cosplayers inspired by the new looks of the franchise (McKinnon alone has a week’s worth of iconic outfits!) And we’ll see it when a sequel debuts to larger numbers than its predecessor because those girls will come back. And they’ll bring their friends.

Our own Mike Smith gave the film 4 stars, but my take on it briefly: The new characters, lead by Kate McKinnon’s standout weirdo Holtzmann, Leslie Jones’s NYC-history-savvy Patty and Chris Hemsworth’s much lauded comedic turn as dim receptionist Kevin, were a joy insofar as they weren’t even trying to step into the shoes of their forebears but bringing their own. Or in Kristin Wiig’s case, a pair of quirky turquoise wellies. Additionally the effects were cool, evoking the glowing spookiness of Disney’s Haunted Mansion rides–which is to say, just the right level for a Ghostbusters installment. And of course, seeing four women take up arms against a ghost army with brand new kick ass weaponry that Bill Murray and co’s point and shoot models could only dream of, was something I haven’t seen before and I need to again.

It’s with this blind hope in mind that I’m going to forge ahead with the following top five wishes for their sequel. Because I live in a world where there’s six Police Academies, four Sharknadoes and my Ecto-Cooler juice box is half full.

1 – An equally stacked cast
The four female leads were front and center of the marketing, rightfully so, but Feig’s supporting cast was nothing to sneeze at either and one of its best surprises. “Silicon Valley” star Zach Woods’s haunted tour guide started it all off on the right foot, quickly joined by the likes of Ed Begley Jr, Cecily Strong, Andy Garcia and Michael K Williams. Heck even the taxi driver from Deadpool (Karan Soni) got big laughs. Whoever cast this thing, stick around.

2 – Some better usage of NYC
The Ghostbusters are based in New York and their strong ties are upheld at their firehouse headquarters, Hook & Ladder 8, which displays the team’s logo on the sidewalk. However for budgetary reasons, the movie was mainly filmed in Boston. Nothing wrong with saving some money, but screening the movie in Manhattan, the fake 6-line subway station raised some eyebrows. And the greatest offense? The ladies dining on Papa John’s pizza. I can suspend my disbelief to hellmouths in the middle of Times Square, but native New Yorkers opting for Papa John’s is a bridge too far. Get those product placement dollars elsewhere. And rope in some more actual locations, if only so this obsessive fan can visit them.

3 – A more sinister villain
I really did enjoy Neil Casey in his minimal screen time as Rowan from a comedic stand point. Still, he wasn’t as menacing as the original’s demonic invasion of Dana’s (Sigourney Weaver) fridge or even the first specter featured here, Gertrude Aldridge (Bess Rous, below). Later when Rowan’s spirit wound up in a couple of our heroes’ bodies and finally a CGI giant, he became still less memorable. More to the point, the Ghostbusters franchise as a whole is now 100% saturated with finales featuring behemoth figures tromping through skyscrapers. Let’s be done with that. The most effective supernatural stuff whether it was the aforementioned Aldridge Mansion, green ghouls lurking behind glass waiting to be released onto our plane, or just a regular mannequin temporarily brought to life, were smaller in scale and creepier for it. A more intimate antagonist would be novel to the team and hey, bonus, also could cut down that budget again. Are you listening, Sony?

4 – A few more original cast cameos for the completists
Rick Moranis, please. Okay, I know this is pie in the sky stuff, especially seeing as he officially turned down a cameo in this first one (wishing them well in a 2015 Hollywood Reporter interview), but juice box half full right? I have a hope that Mr. Moranis checks Feig’s work out and supports the new team in the way that his fellow cast mates did this time around.(I may or may not have yelped when Annie Potts arrived.) Plus I’m a kid of the late 80s…I just super want to see him back in front of a camera and I feel like this is the best shot we’ve got. Failing that, Peter MacNichol would not be unwelcome. If I have a soft spot for Ghostbusters 2, it’s because of him.

5 – Let Kevin join the team!
Chris Hemsworth’s dumb puppy dog of a receptionist was so adorably eager to be a Ghostbuster that in a latter portion of the film, he’d made his own jumpsuit and outfitted a motorcycle with duct taped laser canons. Unfortunately apocalypses being the inconvenience that they are, he didn’t get to realize this dream. Seeing as Hemsworth’s scenes were serious highlights, I’d be happy to see what he would do when faced with the supernatural. It’s probably a safety hazard to the general public, so Holtzmann could start him off with a pimped out laser pointer and train him up from there. At the very least, I hear he’s good with a hammer.

Seriously how can you say no to that face?

I implore you Sony, Paul Feig, Katie Dippold, cast and all the ghostly powers that be to let this team take up proton packs again in the future!

Ghostbusters is still in theaters and is expected to arrive on Blu-ray/DVD in October, hopefully in time for Halloween.