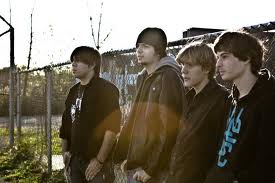 Damian LaRocco is the lead singer for the Staten Island based band Four Nights Strong. The band has just released their first EP titled “Crash and Burn”. Media Mikes had a chance to talk with Damian about the release and what the bands current plans are for 2012.

Adam Lawton: Can you give us some back ground on the band?
Damian La Rocco: We are a group of guys ages 17-21 who love all kinds of music. We each live pretty normal lives but have big goals for the band. We all want to make a career out of playing music because it’s something we love.

AL: How would you describe your music?
DL: Lyrically we’ve been called emotional and meaningful. I guess that’s kind of my goal when I write. I write based on my personal life as well as situations others can relate and connect with. Instrumentally we all have different influences that we mesh together. We try to avoid repetition and sounding generic because it feels fake. We feel we put 110% of ourselves into what we write.

AL: Can you tell us about your latest release?
DL: The “Crash and Burn” EP was something we can honestly say we are all really proud of. We worked with our producer Ethan Bill for quite some time until we found the sound we were looking for. Ethan has been a great help to us and he has been a real pleasure to work with. The CD has been getting a lot of positive feedback from all our fans online and our ITunes sales are going up every day. We started out barely knowing what we were doing and over time with hard work we grew into who we are now as musicians. I think the songs on the CD reflect that.

AL: Do you have a favorite track off the album?
DL: I love all the tracks. It’s hard to actually pick one. “Scared to Breathe” is my favorite to perform live while “Crash and Burn” & “Despair” are very personal to me, I wrote them both when I was in a dark place in my life. “The Message” and “My Last Call” get the crowd pumped and moshing so that’s definitely awesome to see! Overall I catch myself listening to “Scared to Breathe” and “The Message” the most.

AL: What are the bands plans for 2012?
DL: 2012 is going to be a big year for us. We will be experiencing a lot of firsts. Our first music video “My Last Call” will be coming out. We are doing our first summer tour that includes playing some big shows in New York City at The Gramercy Theater, Webster Hall and possibly the Hard-Rock Cafe. We also may have a hint at another E.P coming in the summer but nothing is definite.