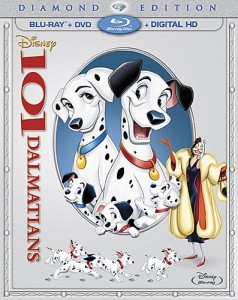 “101 Dalmatians” may not be the best Disney animated film but it is a very important one. This film introduced the Xerox process that save Disney. The film was never very pretty or breathtaking in terms of animation but it was a hit for the studio and probably the reason why we are still getting new films today. Overall, it is still a fun film. I haven’t seen it in years and I enjoyed it quite a bit. My two year old also enjoyed it as well. So I see this being a must watch for the coming months.

Official Premise: Pick your favorite spot to watch — anytime and anywhere — and get ready for a fun-filled adventure with 101 DALMATIANS for the first time ever on Blu-ray and Digital HD! Pongo, Perdita and their super-adorable puppies are in for thrills, hilarious spills and an epic action-packed adventure when they face off with Cruella De Vil, Disney’s most fabulously outrageous villainess. Unleash all the excitement and suspense of Disney’s 101 DALMATIANS, a beloved classic you’ll want to share with your family again and again!

The Diamond Edition Blu-ray of “101 Dalmatians” comes in a combo pack with a Blu-ray + DVD + Digital Copy. The 1080p transfer looks good. There is little grain found here ala “The Sword in the Stone” or “Mickey’s Christmas Carol” but in a good way. I noticed through some blurring when the dogs were running. Not a major issue but definitely noticeable. There are two audio options for this release. First we have a DTS-HD Master Audio 7.1 surround track which sounds quite great. The second is an original Dolby Digital Mono track, which doesn’t have what it takes to keep up with the 7.1 track.

The special features are impressive on this release. There is a all new feature “Lucky Dogs”, which features Disney Animation/Imagineering alum Rolly Crump, ink and paint artist Carmen Sanderson, animator Burny Mattinson, animator Floyd Norman and voice actress Lisa Davis talking about their experiences on the film. “Dalmatians 101” features actress Cameron Boyce, who plays Cruella De Vil’s son in the upcoming Disney’s “Descendants” giving facts about the film. “The Further Adventures of Thunderbolt” is an all new animated short following the black-and-white television star from the movie.

“The Best Doggoned Dog in the World” is actually the tenth episode of “The Wonderful World of Disney”, which aired during its fourth season in 1961. It is presented in its entirety and in high definition, this is a real treat. There are also a bunch of classic bonus features taken from past DVD releases of “101 Dalmatians”, including the seven part feature “Redefining the Line: The Making of 101 Dalmatians”, music videos, unused songs and promotional spots (no pun intended).