California punks Dad Brains return with their latest 7″ colored vinyl/EP ‘Dadditude’ on June 14. The 4 track EP will be available digitally via all DSPs on June 7th.

Vinyl is on sale starting this Friday, May 31 at: https://shop.piratespressrecords.com/.

Frontman Pat Pedraza says, “I’ve never heard of a Fathers Day song in my life, so I was like, hey, we might actually do something original???? Hahahaha. As most of us know, it’s kinda challenging to be original nowadays. I couldn’t ask for anything more with this video and the fun we had shooting it. Families, friends, and kids getting together, kids playing instruments, getting food and water balloons launched at us, and a 20-year-old with a camera filming it…This was the highlight of my musical career so far!!!!

This band of new dads/longtime musicians (members have been in bands such as No Motiv, The Missing 23rd, Creep Division, and The F-ing Wrath) started out as a creative outlet to share the trials, tribulations, and awesome-ness of dadhood. Their 2018 self-titled EP caught on with listeners and a legion of like-minded moms and dads, which led to the split ‘MerryX-Mas’ EP with fellow punk parents The Ramoms, released last winter.

With their latest EP ‘Dadditude’, Dad Brains continue to mine their shared experiences of fatherhood on new tracks that examine the fears, anxieties and sheer joy that all parents experience.

Dad Brains will be playing a pair of local Ventura, CA shows around the release of “Dadditude” on June 14 and 16. See show flyer below. 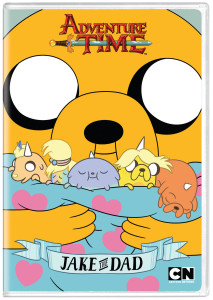 “Adventure Time” is no question of my best…and also most bizarre shows on TV animated or not. When I first saw it a few years ago, I literally couldn’t get enough of it. The show is currently in its fifth season and it only keeps getting better and better…and also weirder and weirder but that is part of its charm. “Jake the Dad” is fifth and latest volume DVD release after “Jake vs. Me-Mow”. I loved this episode where Jake becomes a dad with Lady Rainicorn but that is not all since there are an additional 16 episodes included as well. The real draw for this release though has to be the Jake hat that comes with this DVD. In fact, since I received this my 18-month old daughter has refused to take it off. So I would call this a must own for an fan of “Adventure Time”.

This release includes sixteen episodes from the shows fourth and fifth seasons including: “Jake the Dad”, “Burning Low”, “Gotcha!”, “Sons of Mars”, “BMO Noire”, “The Hard Easy”, “I Remember You”, “All the Little People”, “Mystery Dungeon”, “All Your Fault”, “Five More Short Graybles”, “Vault of Bones”, “Simon & Marcy”, “Puhoy”, “One Last Job” and “BMO Lost”. Currently only the first and second seasons are available complete on Blu-ray with the third coming on February 25, 2014. So this DVD is a great way to own some of the best episodes from this show now and not have to wait for the complete seasons. If the Jake hat alone was a bonus enough for you there is also a character feature called “Little Did You Know”, which is a nice bonus extra if you are a fan of the show.  Can’t wait to see what Cartoon Network has planned next for this show cause I can’t get enough.

Justin Halpern is the man behind the Twitter feed @ShitMyDadSays.  This Twitter feed was not only turned into a very successful book but also a television series starring William Shatner.  “I Suck at Girls” is the second book from Justin Halpern.  Media Mikes had a chance to chat with Justin about this new book and of course what are his father’s thoughts about it.

Mike Gencarelli: What was the biggest pressure with the follow up to “Shit My Dad Says”?
Justin Halpern: I just wanted to write a book that was as entertaining as the first and that people liked just as much. There is a lot of pressure in that since you want the people who liked the first book to like the latest one as well. I wanted to write something that was self organic and that people would like.

MG: What did you enjoy most about the writing process of “I Suck at Girls”?
JH: I think being able to stretch out a little bit more. The first book I wanted to be very brief similar to the Twitter feed. I didn’t want people to have to read 500 pages. I felt I could spend a little more time developing the stories with the second book.

MG: Tell us about your inspiration behind this book?
JH: Before I proposed to my wife I had told my dad about what I was going to do and he told me to take a day and think about what I was doing and, to also think about my past relationships. When I was doing that I realized I had some funny stories that I think everyone probably goes through. I thought it would make a good book.

MG: What are your father’s thoughts on the new book?
JH: He really likes it. He originally told me he hated it. (Laughs) He said that this second book needed to be better than the first or else people were going to shit all over it. I told him people will have a tough time shitting on this book.

MG: What are your thoughts on the television rights to “I Suck at Girls” being sold already?
JH: I just need to be more careful this time. Things with this are still quite a long ways off. I am excited even though the first one didn’t work out so well. Hopefully with this one we can do things right.

MG: What do you think caused the “$#*! My Dad Says” to not last on television?
JH: CBS has some of the highest rated shows and I don’t think the show was doing all that well. You have to be a big hit to stay on the air there.

MG: Have you thought about writing a direct follow up to “Shit My Dad Says”?
JH: The current book has a lot of my dad in it so I consider it the follow up to the first book. This new book just has a lot more in it.

MG:So on a side note, I’ve always wondered why do you only follow LeVare Burton on Twitter?
JH: When I first signed up for Twitter they gave you 20 default people to follow. I was un-following all of them until I got to LeVare. I thought it would be funny if I only followed him.

MG: Are you a big “Star Trek” fan?
JH: No not necessarily. I did use to like “Reading Rainbow” though. (Laughs)

MG: What other things do you have coming up?
JH: I am out promoting the book right now and that is about it. Things are going really well.