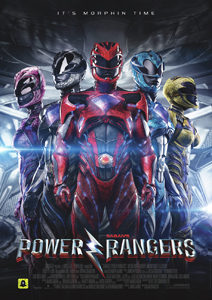 As a Millennial, I watched the “Power Rangers,” but I was not old enough or smart enough yet to do it ironically. Every day after school I’d plop my butt in front of the TV and watch a mindless repackaged Japanese TV show and enjoyed it like it was high art. My mom even suffered through the “Mighty Morphin Power Rangers: The Movie” in theaters so I could get my fix. But here’s the thing, I couldn’t tell you a single Ranger’s name, villain or plot from the shows or movie. So it wasn’t memorable for me, but I’m sure the agony of having to endure it still lingers with my parents. Well, they’ll be happy to know what goes around has come around.

A prologue, millions of years in the past on Earth, sets the stage. We see that circular crystal discs are what give powers to the Rangers, an elite class of protectors. Cut to the future where we meet the next batch of Rangers, but they don’t know it yet. This is the movie’s first mistake as it spends an awful lot of time setting up Jason (Montgomery), a directionless high school football superstar who plans a juvenile prank that ruins his life. He ends him flipping his truck, damaging his knee and being relegated to detention, seemingly forever.

In detention he meets Kimberly (Scott), a former cheerleader who’s betrayed her friend’s trust, and Billy (Cyler), a brainy, yet slightly autistic student who we’ll eventually come to find out is the only originally pure of heart teenager in this movie. “Power Rangers” eventually introduces Trini (Becky G) and Zack (Ludi Lin), but never cares enough to give us any background information on them until right before the third act. But by that point it feels unnecessarily crammed in, like most of the film’s character development.

The movie sometimes chooses to be subtle with its character’s traits, yet at other times slaps audiences across the face with thick intelligence insulting exposition. But this is one of many problems plaguing “Power Rangers.” The movie never seems to settle on if it’s for a new generation of young “Power Ranger” fans or nauseous nostalgia for those who grew up in the 90’s. It’s a mix of both, but the direction choices clash so much, it makes for a jarring cinematic experience.

At times we get that TV safe Saturday morning feel from our future Rangers, like cutesy physical humor montages and a “Kingpin” joke about “milking” a cow, but other times we get blasts of teenage reality like the fallout of revenge porn and drowning your sorrows in beer. I’ll admit that the latter makes the characters a lot more human and relatable, but none of it feels natural. The happenstance of how they all meet and become friends is about as logical as a Bryan Cranston and Elizabeth Banks playing intergalactic warriors who’ve been comatose for millions of years, simply waiting for the right moment to awake.

Cranston, as Zordon, is mildly wasted here, as his only on-screen performance is on a green-screen set covered in thick make-up. He shows up throughout the rest of the movie as a disembodied voice attached to a CGI grid screen, dispensing plot points and ridiculing the teenagers for not being able to come together as a team. Cranston’s delivery is too serious, never taking on the role as mentor. However, he’s complimented by the jokey robot, Alpha 5 (Bill Hader), who seems to fluctuate between hammy and cynical.

Banks plays the movie’s main villain, Rita. She’s the only one in the movie who chews on the green screen scenery. There are moments where Rita is truly delightful to watch because of how cheeky Banks’ delivers her dialogue, but there are certain elements to Rita that are unnecessarily included like when she commits cold-blooded murder or when she crawls across the screen like Regan spider walking in “The Exorcist.”

“Power Rangers” is glum and tonally frustrating, relying on concepts found in the recent trend of gritty reboots while attempting to be a self-serious homage to the original TV show. There are obvious editing flaws that even the average moviegoer should notice. It’s either bad storytelling and pacing or a baby playing with the buttons in the editing studios. Compounding these frustrations is a blatant product placement that would make NASCAR cringe. Was a “Power Rangers” movie ever supposed to be good? No. But it’s not supposed to be this bad.