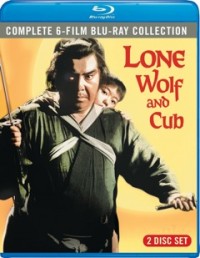 These films show their age a little bit in their high-def transfers but I feel that any noise on these films just add texture to the films themselves. Since they have been completely reconstructed from new prints, overall the 1080p 2.35:1 transfer looks sharp. The audio included is the original Japanese LPCM mono tracks, which is actually a great thing and work very well with these. The special features are…well…there really isn’t any. There are some production notes and trailers but that is all. Lastly, the case presentation is also not as nice as the release for “Shogun Assassin – 5 Film Collector’s Edition”. But nonetheless, hardcore fans of the “Baby Cart” series are going to need to get this release.

Here are the official premises for each of the six-films:
“Sword of Vengeance”: Betrayed by the fiendish Yagyu, Ogami Itto and his son begin their bloody journey towards revenge. Their first commission: to save the life of a Daimyo and kill the traitors and ronin that plot his death.

“Baby Cart at the River Styx”: The Evil Yagyu Retsudo sets a band of deadly female Ninja on Ogami’s trail. Meanwhile, Ogami must kill a traitor who seeks to sell a Clan’s secrets to the Shogun — a traitor guarded by three men known as “The Gods of Death!”

“Baby Cart to Hades”: After undergoing torture to demonstrate his honor and buy the freedom of a girl about to be forced into a life of prostitution, Ogami is hired by his very-impressed torturers to kill a corrupt governor. The governor figures out he’s the target when Ogami turns down the governor’s own commission, and the body-count soon starts rising to monumental proportions!

“Baby Cart in Peril”: Ogami is hired to kill a tattooed female assassin, but the job is not as straightforward as it seems. Meanwhile, Gunbei Yagyu, disgraced by Ogami in a duel before the Shogun, happens upon Ogami’s son Daigoro, and sees his chance for revenge. In the end, Ogami will have to defeat a horde of Yagyu warriors before he can face his arch enemy, Retsudo Yagyu!

“Baby Cart in the Land of Demons”: 5 warriors challenge Ogami to duels. Each has 1/5th of his usual fee, and 1/5 of the information he needs to complete his new assignment. Ogami has to be skillful enough to not only kill them, but kill them in such a way as to allow them to tell him what he needs to know, or he’s not the man for the job. His mission is to kill a mad Daimyo before he destroys his clan — a Daimyo guarded by a legion sworn to give their lives in his defense, even though they’ve just hired Ogami to kill their master!

“White Heaven in Hell”: The final film, and the final confrontation between Ogami and Retsudo. With most of his family already dead at Ogami’s hands, Retsudo launches one last plot to destroy him, and when that fails, unleashes the fury of every remaining member of the Yagyu Clan. Outnumbered 5000 to 1, Ogami might be in a little over his head (and thus, lose it!) this time!