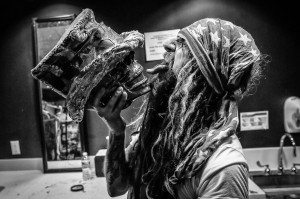 Grammy nominated musician, Rob Zombie has written and directed films like “House of 1000 Corpses”, “The Devil Rejects”, “Halloween (2007)”, “Halloween II (2009)” and “The Lords of Salem”. He is currently working on his next film “31”, which is a crown-funded project. The campaign currently ends on Halloween, so if you want to see Rob Zombie’s most brutal film get made head over to RZ-31.com and back it. Media Mikes had a chance to chat again with Rob to discuss the project, fear of clowns and what we can expect.

Mike Gencarelli: Last year, when we spoke you mentioned that “The Broad Street Bullies” would be your next film; what happened?
Rob Zombie: It just kept getting bogged down. “The Broad Street Bullies” is a true story, so unfortunately when you try and branch out and do something like that it is hard. I didn’t own the rights to it and I was working with other people. It is hard enough getting these movies made when you are in total control but when you get other people involved it just sort of drags on. So I worked on it for about two years and I felt like I could spend the next five years working on it and it still might not happen. I like making movies. I don’t like just having meetings and telephone calls. I may go back to it later but I might not since sometimes things just drag on forever. I don’t have forever, you know? I like to work and make movies.

MG: How was the idea for “31” born?
RZ: It came about in a very funny way. Last Halloween, I was in Pomona, CA working on this haunted house attraction I did called, “Great American Nightmare”. I was watching people running around being scared by people dressed as clowns with fake chainsaws and stuff. I saw the true terror on some people’s faces…even though they know it is fake, obviously since it is an amusement park. People just can’t stand clowns. So that was stuck in head. Then I was researching something online and I found out that Halloween was the number one day of the year when people go missing, according to the Missing Persons Bureau. I thought “Hmmmm…missing on Halloween?” Then I thought about the clowns and I ended up concocting this crazy idea about people being kidnapped and forced to battle murderous clowns, sort of like “The Most Dangerous Game” but with disgusting clowns. At the time, I was still working on “Broad Street Bullies” and getting bogged down, so I said to my manager that I was getting frustrated with this movie but I have this other ridiculous idea. I told him the idea and he said “I think I can sell that”. So it’s funny you work on something for years and then come up with this crazy idea off the top of your head and suddenly everyone is excited. That is literally how it happened.

MG: I grew up (and still am) scared of Pennywise from Stephen King’s “IT” but what do you think it about clowns that always scares people?
RZ: Clown makeup is weird and doesn’t hide everything. If you have a gross disgusting face, it almost extenuates it. It does hide your features though. If you just take white clown make up and smear it on your face, it really does make it hard to identify somebody. Think about Cesar Romero as the Joker, he was still so Cesar Romero but at the same time totally not. There is something so subtly disturbing about it. If they have a mask or a hood, they are totally covered but there is something so perverted about grease paint on someone’s face. The funny thing is that as children we are supposed to find these disgusting characters in grease paint adorable? Sorry but they are terrifying.

MG: With sites like Kickstarter and Indiegogo, what made you take your crowd-funding campaign to FanBacked?
RZ: Originally it wasn’t my idea to crowd-fund, my manager came to me with it. We had a few offers from Kickstarter and the others but FanBacked was brand new and they seemed the most enthusiastic. I liked the vibe of how they worked. It was also focused on entertainment and not all over the board. So we thought, let’s give them a shot and it has worked out great.

MG: What can we expect from this game in the film?
RZ: It is going to keep changing since we haven’t shot the movie yet. We start shooting in February. I love claustrophobic self-contained movies. I never make movies like that. I love films like “Dawn of the Dead”, even though in scope it is a big movie but I always loved when they get stuck in the mall. To me it was always so intense. I just love that idea. All my movies haven’t been self-contained but I have always wished that they were. So what can be more terrifying that being locked in this place and people just keep releasing a homicidal maniac to chase you constantly? There is nowhere to go. If you end up killing one of the guys, your only reward is that they release another one. It is like the coliseum, there is no way out. You literally have to kill every lion to survive. What can be worse than that? That was basically the idea. No rest for the wicked.

MG: Any cast in place yet for the film?
RZ: I have lots of people in mind but I haven’t cast anyone yet or spoken to anyone.

MG: You have said that this will be your most brutal film; any fears of it being censored for its theatrical release?
RZ: Sometimes you have different goals with movies. The goals for “The Lords of Salem” was not to be violent, gory and brutal. The goal of it was to make a slow paced, psychedelic head trip. With “31”, I just wanted to make something that is just so dirty and nasty…that is the goal. Then after you worry about the ratings board, because you can’t predict that they are going to do. If you try and censor yourself in advance, they will find something else. I am just going to make it as fucked up as possible and we’ll figure out a way to get it passed the MPAA. The unrated version then will live on forever, so that is all that matters.

MG: We have three days to go before Halloween and the end of the campaign; what can you tell fans who are looking to back this project?
RZ: We can really use everyone’s help. Even if you can’t donate money, just getting word out is very helpful. Anything helps. People twittering about it on their own is just as helpful as somebody backing it with money. That was always the goal from the get-go. Horror movies have always been a very fan driven industry. When the corporate world gets involved, they always ruin it. I wanted this to be fan involved. So if you want to back this go to RZ-31.com and keep spread the word!