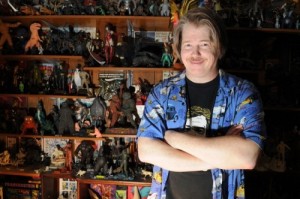 C. Martin Croker is an animator and voice actor on various Adult Swim programs like “Space Ghost Coast to Coast” & “Aqua Teen Hunger Force”.  Media Mikes had a chance to chat with C. Martin about his work with Adult Swim.

Mike Gencarelli: How did you get involved voicing both Dr. Weird / Steve for “Aqua Teen Hunger Force”?
C. Martin Croker: I had done both Zorak and Moltar for “SGC2C”, so I’m sort of used to doing characters that converse together. I had worked on the first go-round of design and animation for ATHF, but when the call came for additional design work (which wound up being Dr. Weird and Steve) I was busy with another project. Matt Jenkins and I had split all the original designs for the show up to that point and since the designing of the two scientist characters went to him, they very democratically threw the voicing of those characters to me. When I initially came in to record Dr. Weird, Dave and Matt had me to try like a Paul Frees/Haunted Mansion type voice. They kept saying, louder LOUDER until it morphed into my “the-band-is-playing-but-I-want-the–bartender-to-hear-me ¬voice”, voice. Steve is totally in that Daws Butler / Mr. Jinx vein, but a bit more subdued.

MG: Did you have an improv control when it came to some of your classic lines?
CMC: Har! What classic lines are you referring to? Usually when I record v/o for any given [adult swim] show I’ll read the line as written three or four ways, then do some variations. About half the time the supervising producer (who might also be the writer) will ask me for my own take or if I have any other ideas for what the character might say in that situation. Most of the time I never knew what they chose until the animation for that episode was in place… Sometimes I didn’t know until the episode actually aired.

MG: Besides voicing characters, you also have worked as Cel Animator for the show; tell us about that?
CMC: If we’re talking about Aqua Teen, I got a call from Dave Willis and Matt Maiellaro, two of the writers from Space Ghost Coast to Coast, who wanted me to meet with them and talk about a new project. Matt mentioned that they were the human-sized food items he and Dave had pitched as a Space Ghost Coast to Coast episode a season earlier (I had been the directing animator on SGC2C Coast so I’d been working with Matt and Dave for a few years at this point). On a rainy Sunday in 1999 we met at “The Highland Tap”, an underground watering hole in Atlanta and we began to hash out some ideas. A fair amount of what we came up with that day stuck. Within a couple of weeks Matt Jenkins (who had assisted me previously on SGC2C)had done some takes on the main three “Aqua Teen” characters and that helped solidify the look. When we divvyed up the main characters for animation the first go round, Matt wound up animating Shake, The Rabbot and Carl (who he designed) and I did Frylock, Meatwad and the ever-lovin’ Danger Cart. Matt, as I said, designed Dr. Weird and Steve in a second go-round that my schedule didn’t allow me to participate in. So, I think voicing them instead, wound up being my consolation prize (which I accepted with Daffy Duck-esque glee). Since then, I’ve designed and animated all manner of additional animation of the main characters for the show and tons of new ones including; Mothmonsterman, M.C.PeePants (all versions but the cow), Paul, Tera Patrick, the 100 Monster, the Pod creature, The Robot Babysitter, Everywhere Robots, the Bayou Boo-ya, some Bats, Vampires, Bears, and… a bunch of other stuff I forget.

MG: Why did they stop those openings back in 2003 and how does it feel to have them back now for season 9?
CMC: They (Dave and Matt) just felt like they wanted to try something different with Spacecataz. And [The Dr. Weird and Steve opens] were only back for like one episode… but it was still nice to see ‘em again.

MG: You were Animation Director and Lead Animator for the “Aqua Teen Hunger Force” film, what was your biggest challenge compared to working on the TV series?
CMC: It was about seven times the work to begin with… And obviously the animation needed to be a bit tighter and more detailed for the big screen. For any given ATHF episode in addition to designs and animation I provided I usually scanned and painted my own cels and loaded them into after effects before delivery to Williams street. In the case of the movie, I actually drove the stacks of animation cels and exposure sheets over to Radical Axis (The Atlanta production house that puts the show together) so that all the elements for the film would be executed with the same scan and paint system. It ultimately equaled a lot less work for me… but I had a lot less control of how the stuff I had animated looked onscreen.

MG: Out of all the great characters you play, Moltar/Zorak/Dr. Weird/Steve do you have a favorite?
CMC: Zorak’s the obvious choice here. He’s like Don Rickles but more sardonic. I would hope he has a fifth of Don’s longetivity.

MG: How did you find the voice for characters like Zorak and Dr. Weird? What is your process?
CMC: I had put Zorak and Moltar in the original show pitch to play the “imprisoned foes” angle and give the show some ongoing internal conflict. Zorak was originally done by legendary voice-over master Don Messick. When Don wasn’t available to do Zorak for this incarnation the role was up for grabs. Horrified that basically someone awful would get the part I stepped up to the plate. Zorak had been my favorite SG villain since I was a kid and I had actually recorded a Zorak message on my answering machine, so I’d been playing around with that type voice for awhile. Soon as I blurted out my impromptu audition for Mike Lazzo and Company, they said “Okay… You’re Zorak. That solves that problem”. It was really about that fast. Andy Merrill was slated to do Moltar’s voice as sort a a Hillbilly version of what became Brak’s voice, but just a couple of weeks before air they decided that wasn’t working and had me come in and redo his tracks with what started off as being a Ted Cassidy-type voice and quickly morphed into modern Moltar.

MG: Which did you prefer working on more “The Brak Show” or “Space Ghost: Coast to Coast”?
CMC: I enjoyed both immensely , but for different reasons. It’s a tough call but Moltar would be pissed if I didn’t say “SGC2C”.