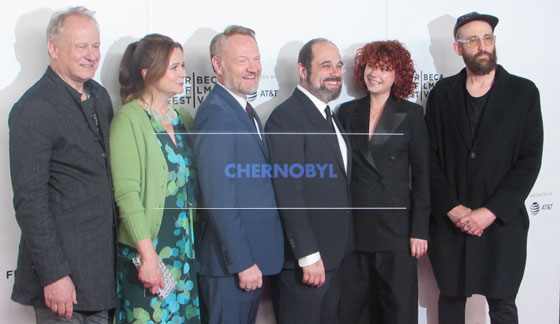 In April 1986 the most catastrophic man-made incident the planet had ever seen occurred when reactor 4 of the Chernobyl nuclear plant exploded during what should have been a safety test. The effects of the accident still wreak havoc over the landscape and containing the fallout has become an industry unto itself. It’s a job which will require centuries of human support. Tonight on HBO, Craig Mazin’s five-part miniseries, CHERNOBYL, dives deep into the the accident as it happened and the human cost and bravery it required to ensure that this tragedy did not engulf still millions more.

This past week at the Tribeca Film Festival, Mazin and his talented cast debuted the first two episodes of the series on the accident’s 33rd anniversary. The premiere episode was nothing short of a nightmare as the series delves into, in brutal detail, the accident and the shocking mishandling of both the initial fire and the surrounding population in those crucial first hours and days of fallout. It was a tense first hour and a brilliant setup into the second which saw the introduction of the scientists and politicians who then had to set about handling what was to come. The second episode in particular sees a stellar performance from Stellan Skarsgard as he plays a man coming to grips with his own mortality and entreating fellow countrymen to show selflessness so that millions can be saved. I spoke with Skarsgard, who also offered brief comments on his upcoming work in DUNE, as well as co-star Emily Watson on the red carpet about their own knowledge of the accident as it happened and the timely message this series has to offer in regards to listening to scientists.

Emily Watson plays Ulana Khomyuk, a character created for the show as an entry-point into the role of a collection of European scientists in the fallout of Chernobyl.

Lauren Damon: Your character isn’t one specific person, but represents a collection of people involved with the accident, did you speak to people who experienced this?

Emily Watson: No. It’s sort of in tribute to many of the scientists who worked on the discovery of what happened. So I kind of had a bit of a blank sheet really to make up what I wanted to do. But Craig had written the character as coming from Belarus, which is a place that suffered terribly in the second world war. And she would have been a young child at that time, so that gave me a sense of just finding someone who was very very tough. It made her the perfect person really to go after the truth and find out what happened.

Do you remember when you were first aware of the Chernobyl accident in your life?

Watson: Yeah, I was a student at university and I remember there were students at my college who were on a year out, away in Kiev, and they all had to come home pretty quickly, it was very scary.

Did you have any misconceptions about the event going into this project that the script changed for you?

Watson: Oh my god, when I started reading the script, I had no idea that sort of within a few days–sort of 48 hours after the first explosion–there could have been one that was ten times worse. That would have taken out half of Europe.

In theory you could have been in range of those effects?

Watson: Definitely in range of radiation fallout…But yeah, it could have been much much worse. It was due to the heroism of the people on the ground who contained it and prevented it from being much worse.

What’s the biggest take away you’d like viewers to get from this series?

Watson: I think it’s a parable for our times. I think you ignore the truth and scientists at your peril.

Stellan Skarsgard plays Boris Shcherbina, the Deputy Head of the Soviet Government at the time.

What did you find surprising from hearing about Chernobyl originally in 1986 and then from working on this project?

Stellan Skarsgard: What I knew from ’86 was what you got from news media, which gave you a sort of superficial idea of what actually happened. What we learned through working with this material is I know now what technically went wrong, how the reactor works and what the mistakes they made were.

You also learn about it [was] more grave, the sort of the political system–the impact that had on the accident. When you have a system that is supposed to be perfect, you cannot allow any dissent in terms of somebody criticizing anything you do or any flaws cannot be accepted. And that then means that the truth was suppressed. It was all over the Soviet Union at the time. I mean truth is suppressed also for other reasons in the west now. I mean when you talk about Fukushima that was money that suppressed truth and created disaster there. In Boeing, you sent planes that are not fit for flying because you want to make money. So another way of suppressing truth and science. I think it’s important, an important film because it–not only because it talks about what we’re doing to this planet, the environment, which is really scary, but it also talks about how important it is that we listen to people who know what they’re talking about.

Facts are facts. They are not just individual ideas. Some facts you have to deal with and you have to accept and we have to listen to scientists. I mean 98% of the scientists in the world say that we are heading for a catastrophe in terms of global warming. We cannot ignore that. Do not ignore that.

Tell us about your character

Skarsgard’s next film role is in the highly anticipated adaptation of Frank Herbert’s sci-fi classic, DUNE, where he’ll play the villainous Baron Harkonnen

Lauren Damon: Have you begun work on DUNE as Baron Harkonnen?

That’s what I was wondering! Because the Baron is such a grotesque character but when you were cast I remember looking at a shot of you as Bootstrap Bill [Skarsgard’s heavily barnacled Pirates of the Caribbean role] and thinking ‘This man can handle anything they put on him!’

Skarsgard: [Laughs] That’s very nice of you! Thank you. I will probably spend probably six to eight hours a day in makeup and it will look fantastic.

What are you most excited about in doing that project?

Skarsgard: It’s a great story. It’s a fantastic world and Denis Villeneuve is a director that I’ve always wanted to work with. So I’m really happy, he’s a wonderful man and a great director. So I think–except for the eight hours in makeup–I think I’ll have a fun time.