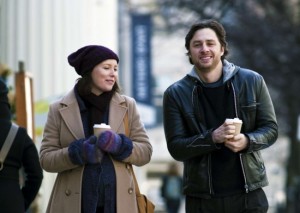 I do not think I ever saw one episode of “Scrubs”…but nothing against Zach Braff, just never got into it. For some reason this film stuck out to me and I felt that I should see it. It turns out that this film hits very close to home for me with having a pregnant wife currently…you will find out more about that down below. Tribeca Film has really become a reliable and great distributor and have been releasing some great films. This film has a great story and a wonderful cast, who give some really powerful performances.

The story is about a fast-living drug dealer named Henry (Zach Braff) who accidentally hits a pregnant woman, Nathalie (Isabelle Blais) while driving recklessly and flees the scene. Due to guilt Henry, tracks her down, only to find that she lost her child in the hit and run accident. Henry tries to fix things and make things better, even though she doesn’t known the truth about that night. Is Henry able to save Nathalie or is it too late for both of them.

Zach Braff wasn’t good in this film but REALLY good. It was a very powerful role and he nailed it. Isabelle Blais was very intense and delivers the emotional role quite well. The two of them have great chemistry and really make this film, since it is really only about the two of them. The only bonus features on the disc is an interview with Zach Braff, interesting but not outstanding. That is my only complaint with Tribeca Film DVDs is that they do not pack any of their releases with major extras.