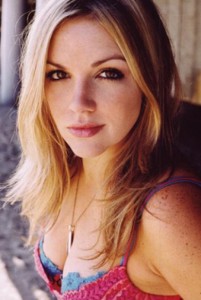 Corri English is the star of FEARnet’s “Holliston”, created by Adam Green and Joe Lynch. The show completed it first season this summer and will be returning for it’s second in 2013. Media Mikes had a chance to chat with Corri about her role on the show and the plans for season 2.

Mike Gencarelli: How did you end up on the show “Holliston”?
Corri English: I had worked with Adam a couple of times. I did a series of holiday claymation webisodes he did for American Eagle. The series was called “Winter Tails” and he had me do some voice work on those. Shortly thereafter Adam was doing one of his infamous Halloween shorts and needed someone to fill in for Daniel Harris because there was a scheduling conflict. We had a great time doing that and became friends. “Holliston” has had a couple of incarnations so when he first started putting that together he brought me on board to do the show. It was really exciting to work with Adam again and see the show come to life as I had been attached to it for about 2 years prior to shooting.

MG: What do you enjoy most about your character and how does she relate to yourself?
CE: I know Adam pulled certain parts of our personalities in to the story. He made my character an aspiring country singer. I am actually a country singer. For the audience I know things are a little bit blurry because we all have our own names. At times they may not know where the characters end and where we as real people begin. I feel like anything on the show can happen and that is something that I really love. Initially Adam told me about the role and how I would be the girl that was always breaking his heart and that the audience would probably end up hating me. However, until that happens though they are going to torture me. (Laughs) I think in season 1 Adam found out I was up for anything and has really ran with that in season 2.

MG: What do you think it is that makes the show work?
CE: I think for fans of horror there are tons of those references going on within the show. Also though for people who may not necessarily be horror fans there is a whole lot of other stuff going on. Adam did such a good job of creating characters that I am sure everyone can relate to at least one of the characters on the show. I think there is so much heart and real life emotion going on that it makes the show interesting. There is a lot of reality in the show.

MG: What was a highlight for you of season 1?
CE: Laura and I had so much fun with the market basket episode. That was something that came out of rehearsal and Laura not being able to say those lines as English is not her first language. Sometimes little quirky things would come up and she couldn’t tell the difference. They would just let stuff like that go on forever. There were a bunch of really great guests on the first season as well. Tony Todd was great and also getting to meet John Landis was awesome.

MG: Can you give us any updates on season 2 of the show?
CE: We just finished filming. We shot most of the show on sets here in Los Angeles however for the last episode we actually shot in Holliston, Mass. We finished up with a found footage episode so we are running around the woods “Blair Witch” style. It was a fun way to wrap up the season. I am really excited for fans to see the new episodes because it dives much deeper in to the characters and their relationships. When we got done with the table read we were all laughing and crying. There will also be an animated episode this season as well as a holiday special which bridges the gap between the 2 seasons.

MG: Can you tell us a little about your band Broke Down Cadillac?
CE: We are a country/rock band that works out of Nashville. We have a ton fun doing it and we also have had quite a few opportunities to write songs for television and films. It’s really great when I get to put the singing together with the acting. I get to sing one of our songs on the show this year which I am very excited about.