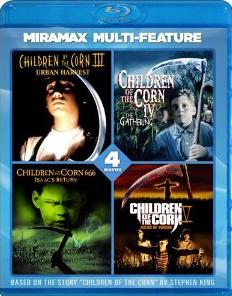 The “Children of the Corn” series is a guilty pleasure.  The films in the franchise were never my favorite horror films but I could never say no to a new sequel.  Over the years there has been a total of eight films in this series, so this Blu-ray is just the tip of the iceberg.  Echo Bridge is behind this release, which they are very well-known for their Miramax Multi-Features.  This release is a great pick-up for horror fans, especially for its extremely low price.  It is also a great place to get all these films in one place and it is a step up from DVD for sure.

“Children of the Corn III: Urban Harvest” is one of my favorites and follows a couple who adopts a pair of orphaned brothers, but the boys may not be as sweet an innocent as they seem.  “Children of the Corn IV: The Gathering” follows a young medical student who must solve the mystery that plagues the children of a small Midwestern town, starring a young Naomi Watts.  “Children of the Corn V: Fields of Terror” follow six college students who take a wrong turn in a deserted rural town to discover that this place hides a murderous cult of evil children. “Children of the Corn 666: Issac’s Return” follows Hannah Martin, who while looking for parents picks up a dark stranger, who ends up assisting her in completing a sinister prophecy.

Let’s get to the Blu-ray presentation which is actually surprisingly decent.  The video transfer for “Children of the Corn 3, 4 & 6” are only presented in 1080i but honestly look pretty good. “Children of the Corn V” is presented in 1080p.  The picture has solid clarity and the colors are sharp.  It is definitely a step up from the previous DVD transfers.  The audio for all four movies include only an Dolby 2.0 Stereo track. They work though I always prefer 5.1 audio on Blu-ray, since 2.0 just screams DVD quality. Nonetheless, this is still a great purchase if you enjoy the series.