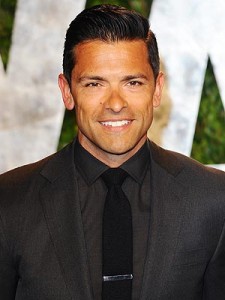 Mark Consuelos guest starred this season on the hit FX series “American Horror Story: Asylum”, where he plays the role of ‘Spivey,’ an inmate at Briarcliff who we first seen during a rough encounter with another character. Mark’s character recently reappeared during the episode titled “The Origins of Monstrosity”. Media Mikes had the chance to talk recently with Mark about his appearance on the show.

Adam Lawton:  Can you tell us how you got involved in this part?
Mark Consuelos: Yes. I am friends with Ryan Murphy and he wanted to talk about this particular project. We had dinner one night and he explained the role and how ‘Spivey’ was going to look. We really got into the physical characteristics of ‘Spivey’ and he did warn me that he’s going to be a super dark kind of character, extremely demented, and for me I said, you understand that’s exactly why I would want to play ‘Spivey.’

AL: Were you allowed to give your own input in developing the character yourself, or did they have a certain agenda for you to work the character?
MC: I think that with most good scripts and good shows they expect the actor to bring some of their ideas and some of the things, the back story of the character, or just certain aspects, they expect the actor to do some of that stuff, and I think it’s always a good collaboration between the actor, the writer and the director to try stuff out during the process. I think what was really great is that people were open to certain things and they would let you know if that was something they wanted you to do more, cut that in half, do more of that, we need you to do this, but I feel like on any really good show everybody comes with their own stuff and you want to try as much as you can. I would say that the character was really clear in some of the things that he’d been doing and some of these actions, so it makes it easier for the actor. With this character there wasn’t really a lot of gray area here. They wrote him very specifically, which I really appreciated.  But just because they are very specific about those things, it doesn’t mean that it limits you. Actually, it makes those possibilities and some of your choices even greater.

AL: Would you say that you’re more of a fan of that type of direction, or do you like to sometimes havea little bit more defining in a role?
MC: No, I love the collaboration. I think every actor would probably say that it’s always a collaboration and if you ask directors they expect the actors to bring something. They don’t want to be thinking for everybody.  I think I enjoy this kind of – again, I think it was a hybrid of both.  There was a lot of collaboration but it was also very, very specific with an extremely specific views, especially from Ryan, on certain things that I thought were really good.  You have to have a specific view and you have to be pretty precise about that.  I think as an actor it’s always great to have a little bit of both

AL: What was the make-up process like for this role?
MC: It took anywhere from two and a half to three and a half hours, depending on what’s going on.  Whenever they say it’s going to take that long I’m like, yes, right, there’s no way, what’s so
hard about that.  But these guys are definitely artists.  They’re amazing at what they do. Just
getting it on and then once they get the stuff on the prosthetics, the way they go about touching
them up and painting them and adjusting them, like I said they’re really artists.

AL: With the show being so dark how do you protect yourself from taking that character and the tension of the storytelling home with you every night?
MC: As dark as you think the stuff that you’re doing as an actor on that show is, once you watch it you’re like, oh, man, it could have been a lot darker, having seen some of the other things that people were doing.  And so I don’t know, I saw it as such a great opportunity that I literally had so much fun doing it and there was excitement about doing it, and I didn’t have that much trouble separating myself from what was going on, on set.

AL: It was just announced that the show is being picked up for a third season. Would you be interested in being on the show again for next season?
MC: Absolutely! It’s been so fun just to be part of it, the whole buzz around the show is exciting, and then when it actually starts airing people absolutely love it. I got extreme street credibility from my high school aged son, he’s like, “Dad, the fact that you’re in “American Horror Story” is absolutely cool.” I was like, “I’m not sure if it’s appropriate for you.” And he was like, “Dad, come on, I’m a New York City kid in high school”.