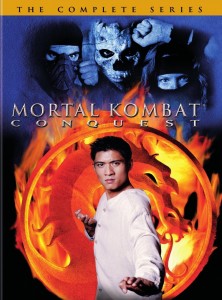 “Mortal Kombat: Conquest” is not the best thing to ever come out of the “Mortal Kombat” franchise. Also know as “Mortal Kombat: Konquest”, this show was quite cheesy and didn’t have the gory edge that the franchise is known for. I do have a soft spot for the show because it was filmed at Disney-MGM Studios in Orlando, Florida…something that can sadly never happen anymore. It aired from 1998-1999 and only lasted 22 episodes. So it has been over 15 years, since I have last seen this show and it honestly hasn’t gotten any better. Still good for a laugh or two.

The show included some of today’s well-known names like Kristanna Loken, Eva Mendes, Jamie Presley and Fabiana Udenio. The main characters in the show focus around Kung Lao, Shang Tsung, Raiden and Shao Kahn. Other game characters that appear are Scorpion, Sub-Zero, Kitana, Noob Saibot, Quan Chi, Mileena, Rain, Reptile and lastly also Smoke and Goro but in CGI format. If you are die-hard Mortal Kombat fan, you are going to want to check this out.

Official Premise: In a dark and mythical re-telling of classic tale of good versus evil, the TV series ‘Mortal Kombat Conquest’ follows the fierce warrior Kung Lao and his comrades Taja and Siro on the their quest to protect the earth realm from falling under the control of the evil conqueror of realms Shao Kahn, ruler of the Outworld. Vital to the survival of mankind are warriors who can compete in Mortal Kombat. While combatants from Outworld have magic and darkness on their side, fighter from the Earth Realm have only their strength, both physical and mental, and belief that their cause is just and right. Will good triumph over evil?

This show has never been given a proper DVD release since it aired on TV. The UK released a few episodes and never finished it. Warner Bros is the savior of this campy-martial arts series. They are bringing the complete series to DVD for the first time ever. Audio and video are standard for DVD, nothing terrible and yet not outstanding either. Sadly there are no special features included to accompany these 22 episodes. But at least fans get the episodes that they were waiting were…they were waiting right? Hello?