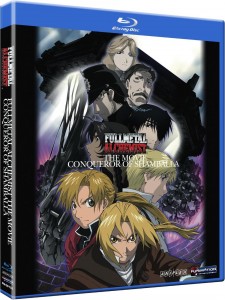 When “Fullmetal Alchemist” completed its 51 episode run, I was left dying for more…as was every other fan. “Conqueror of Shamballa” is our answered prayer. Of course this was before the second series “Fullmetal Alchemist: Brotherhood” was developed. There is one catch though, you would have had to watch the original series first before watching this, since it picks up right after the end. There is no explanation of the the storyline or back story of the characters, so be sure to watch the series first unless you will feel lost. Nonetheless, this movie is an epic conclusion to the series and a perfect compliment to the series. If you’re a fan of the “Fullmetal Alchemist” series, then this is a must watch!

Official Premise: It is 1923 in Munich. Two years have passed since Edward Elric’s sacrifice ripped him out of his world and into ours, separating him from his younger brother, Alphonse. In that time, Ed’s continued research into rocketry has allied him with Alphonse Heiderich, a fellow researcher who oddly resembles Ed’s brother. Progress has been slow, however, and Ed has become discouraged. But when he saves a quiet Gypsy girl with the power to read minds, Ed is quickly pulled into a plot by the Thule Society and the burgeoning Nazi Party that could drag both worlds into a terrible war. Back in his own world, Al has been unlocking new secrets of alchemy and gaining incredible powers, all in the hopes of finding Ed. Battling the occult, ideological extremists, and monstrous Homunculi lurking in the shadows, can the brothers find a way to reunite without causing chaos and bloodshed? What will happen when the world of alchemy and the world of modern science collide?

FUNimaton Entertainment is known for delivering very sharp Blu-ray releases.  The 1080p transfer is quite impressive.  The animation on the film seems different from the series but still looks good. Since the film is so epic the action is well portrayed and looks impressive. There are two audio tracks on this release. The English track, Dolby TrueHD 5.1, is preferred and easily takes the win on this release. The English voice cast has become so recognizable and fan favorite for the series. The Japanese track also includes a Dolby TrueHD 5.1 track and hardcore fans will still enjoy and appreciate, but I have to go with the English track here.

The special features are very impressive for the film. There are three full-length audio commentary tracks. The first is with director Seiji Mizushima, Kugimiya Rie (Al), Toyoguchi Megumi (Winry), and Park Romi (Ed). The second is with Seiji Mizushima, Miyahara Yohei (technical director), and Oyabu Yoshihiro (production desk). The last is hosted by Mike McFarland (Jean Havoc) and Colleen Clinkenbeard (Riza Hawkeye/Rose Thomas) and plays more like a voice over interview with cast chatting over the film. There is a 40 minutes “The Making of Fullmetal Alchemist: Conqueror of Shamballa”, the featurette includes interviews with director Seiji Mizushima and packs some nice behind the scenes clips. “Talk Session with Seiji Mizushima, Romi Park, Rei Kugimiya, and Toru Okawa” is a sit down with the director and voice cast from the series to chat about the film and the series. There were also seven trailers for “Conqueror of Shamballa” and some production art.