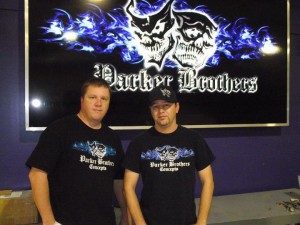 Marc & Shannon Parker are the owners of Parker Brothers Concepts, which is located in Melbourne, FL.  They are also the stars on Syfy’s “Dream Machines”.  They have created cars for 50 Cent, WWE’s John Cena and Universal’s recent film “Battleship”.  Media Mikes recently had a chance to visit the shop in our first collaboration with MyGarageShop.com and got a chance to sit down and chat with the guys about the show and their inspiration behind it.

Mike J. Gencarelli: Tell us about the origin of Parker Bros Concepts?
Shannon Parker: It actually happened by accident. We started out just building things just to be building things. To begin with Marc and I talked about just building choppers, just regular bikes. I thought with the economy the way it way, I thought it was a bad idea because there are a lot of chopper builders out there. We only had enough money to build one…
Marc Parker: We didn’t even have enough money to build one [laughs]
SP: We didn’t have quite enough money to build one vehicle. So we talked about it a little bit and I really wanted to do a replica of the Batpod from “The Dark Knight”. I thought if we run out of money or can’t sell it at least I got something I wanted anyway. So we built it and put it out on the internet to get attention to sell it. We put it out there for $100,000 and when we did that it drew all kinds of attention. We weren’t able to sell it right away but it gave us some great attention and a step towards what we should do next. I think the next step we built our Xenon Light Motor Bike. After that we were off and running…

MJG: How did you get involved with SyFy and “Dream Machines”?
MP: Once the Xenon Light Motor Bike hit the internet it started going viral and before we were even done, we got a call from the TV people. At that point we were only in business for a couple of months. A guy named Edwin Zane called us up and asked “How would you like to do a TV show because the stuff you do is really cool?”. The company he was with at the time threw out a couple of numbers to us and at the time went with out gut and didn’t go with it…luckily. Especially now that we know what we know. He left that company and went to another company and pitched us again.
SP: In the meantime, we were getting pitches from other production companies as well but we never felt comfortable. We liked Edwin as a person and felt comfortable with him. Edwin then moved to another production company called Triage, Inc. and we ended up going with him full circle around.
MP: Triage is taking good care of us. It is a good show for them. They are a big enough company that they are able to do what needs to get done but still small enough to where we are important to them. Once we signed up with him then he pitched it to seven-eight networks. Literally the next day, he had four of the networks interested in the show. Syfy stepped up and said the first day “He is a contract we will take it”. No messing around. They are revamping that network right now and our show fits in well with them.

Mike P. Gencarelli: What made you switches from Parker Bros Choppers to Parker Bros Concepts?
SP: It was the show. More than anything, we didn’t want to come across as old school bike builders and that is it.
MP: When we first started, the original idea and name of the business was going to be Parker Bros Concepts but then we thought no one would know what that is. The original thought was choppers sell, the stuff we are building is weird and not sure if it would sell or not. We were probably going to end up building a couple of choppers local and build our way up. Then on the side build the concept and if people like them great and if they don’t we can just keep them. We went with Parker Bros Choppers for the name and then it came around full circle since the stuff we were doing was more important to the TV people. They didn’t want us to look like the Orange County Choppers. We switched it over to concepts.

MJG: What was it like shooting a reality show and working your day to day business?
MP: Oh my God!
SP: It was difficult…
MP: …and a lot different than we thought it was going to be. SP: You think it is just going to be a camera standing there off in the background and shooting but it doesn’t really work that way. There is a lot of interviews. It is a totally different world for us. It was a cool experience but it was pretty difficult to build something when they are asking us to do it over. Sometimes they may not get it the first time or may need a different angle.
MP: Or before you do anything you need to check it first with the showrunner or director and make sure it is something if they want to get on camera or not. Then we need to wait for them to get the cameras ready before we do the work.

MPG: On the show you guys have these ridiculous deadlines. Is that due to the show and now that we know about filming; how does that affect the deadlines?
MP: It kills the deadlines.
SP: Normally you would think the deadline is reality. All of these things were needed for certain events or premieres. It was one of those “have-to” situations. You have to have it done by this time.
MP: In addition all of these projects, like 50 Cent’s car, if 50 came to us normally and said I want this car, wewould say give us a year/year and a half and we will have this car for you. But you can’t build a show around something like that. All of the deadlines came into play since we only have “X” number of months to film “X” number of episodes. So a lot of these we had to cram into a shorter period of time just because of being able to film them.

MPG: Got a funny question, why is the logo on the roof?
MP: It is actually not!
MPG: It’s not? CGI?
MP: On the show they will show the roof two or three times and sometimes it is there and sometimes it is not. They spent a lot of money on this helicopter for one day. One of the shotsthey wanted was a building shot. The building looks kind of plain and didn’t really stand out against everything else on the road. They wanted to use the shot since they spent the money on the helicopter and so they CGIed it up there.

MJG: What was your most challenging project to date?
MP: Filming a TV show [laughs].
SP: I don’t know I think John Cena’s car was very difficult. Trying to figure out all the things that go into it. That was was also weird for us beecause we started out with a frame, since normally we don’t. We had a lot of issues…
MP: …trying to work around it. Sometimes starting from scratch makes it a lot easier on you with the crazy designs we are working with. It is hard to take sometime and make it fit into that design. If you just start from scratch, even though there is a lot more hours into it, it makes the design and the build come together a little easier. The most difficult in my mind was the Shredder from “Battleship”. With the Shredder we really got to showcase what we wanted to do. When we started this show, we threw a bunch of really over-the-top project out there at the network. They had us tone it down a bit but not completely insane.
SP: Like the single man sub-marine.
MP: Yeah we wanted to do a one man attack sub-marine and some flying vehicles. But that was personally the hardest but also my favorite build.

MPG: Besides plans for season two of “Dream Machines”; what do you see yours doing years down the line?
MP: Hopefully, we get to execute our plans from the very beginning. We want to be the go-to guys for Hollywood. We want to be the guys to build the vehicles for the movies and TV shows. Whether we are on TV or not, if we are building these things that is what we are into.