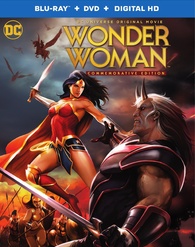 “Wonder Woman: Commemorative Edition” is a cash-in re-release of the 2009 animated film from Warner Brothers to ride in on the release of the new live-action “Wonder Woman” movie. This was the fourth film in the DC Animated Universe that is now up to twenty-eight films and counting. The new “Commemorative Edition” isn’t the WOW release that I was hoping for. It packs the same video as the 2009 Blu-ray and a slightly upgraded audio track. There are few new extras but also some missing from previous release. Also I would have loved them to include an exclusive action figure or something to make this extra special.

Official Premise: On the mystical island of Themyscira, a proud and fierce warrior race of Amazons have raised a princess of untold beauty, grace and strength – Diana. When U.S. fighter pilot Steve Trevor crash-lands on the island, the rebellious and headstrong Diana defies Amazonian law by accompanying Trevor back to civilization. Meanwhile, Ares (the God of War) has escaped his imprisonment at the hands of the Amazonians and has decided to exact his revenge by starting a World War that will last for centuries and wipe out every living being on the planet, starting with the Amazons. It is up to Diana to save her people and the world – by using her gifts and becoming the ultimate Wonder Woman!

“Wonder Woman: Commemorative Edition” comes as a combo pack with a Blu-ray + DVD + UltraViolet copy included. The DTS-HD Master Audio 5.1 is a step up from the previous Blu-ray release. There is really only one new short special feature included here: “What Makes a Wonder Woman” which dives into the overview of the character. The only new extra is a “Sneak Peek at Batman and Harley Quinn”, which is an upcoming DCU Animated feature.

Other special features taken from previous release are “Wonder Woman: A Subversive Dream”, which runs nearly 30 minutes as does “Wonder Woman: Daughter of Myth”, which go deeper into the mythology of the character. Lastly there is a a commentary track from the creative team on this film. Sadly though we lost the two bonus Justice League Episodes (“Paradise Lost” parts 1 and 2, “Hawk and Dove”, and “To Another Shore”) from the last release. So its a toss up for me. If you have never seen this film and looking to get the digital copy, this might be for you if you own it already, no need to repurchase.