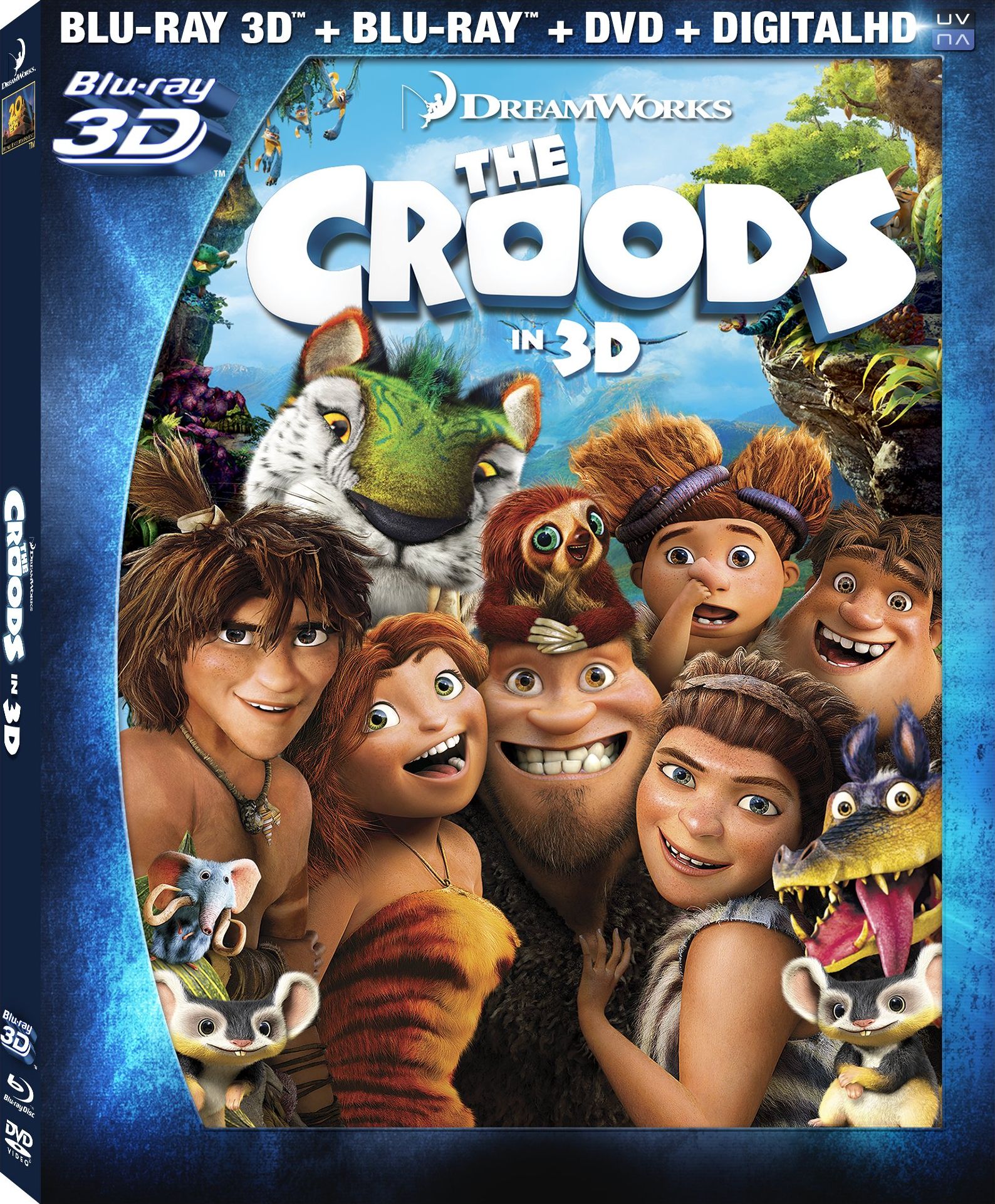 DUN DUN DAHHH! DREAMWORKS ANIMATION’S EPIC COMEDY-ADVENTURE, THE CROODS, ARRIVES ON BLU-RAY™ DELUXE EDITION AND DVD WITH A BELT PLUSH TOY – FOR A LIMITED TIME – ON OCTOBER 1ST
Over $582 Million at the Box Office Worldwide!
Blu-ray™ Deluxe Edition and DVD are Packed with Croodaceous Content!
Get THE CROODS on Digital HD™ Two Weeks Early!

LOS ANGELES, CA – Dun Dun Dahhh! Lauded by critics as “the first great animated film of 2013” (Pete Hammond, Movieline), Twentieth Century Fox Home Entertainment announces the blockbuster hit, DreamWorks Animation’s THE CROODS, will debut on Digital HD™ on September 15 and Blu-ray 3D™, Blu-ray™ and DVD on October 1. “An instant animated classic,” (Jake Hamilton, FOX-TV), THE CROODS promises to bring the whole family together “from 4 to 104” (Sam Rubin, KTLA), to delight in “stunning visuals, humor and heart,” (Jim Hill, Huffington Post) as the world’s first family embark on an unforgettable adventure. The Blu-ray™ and DVD are chock full of fun bonus material that will bring the vibrant, amazing world of THE CROODS home for the whole family to enjoy. The perfect treat for kids of all ages, THE CROODS Blu-ray™ and DVD comes with a lovable Belt plush toy for a limited time only.
Join the Croods on the journey of a lifetime in the epic comedy-adventure that “has the magical wonder of How To Train Your Dragon” – Jake Hamilton (Fox-TV). When their cave is destroyed, the Croods set out to explore a spectacular landscape filled with fantastic creatures, strange surprises…and a whole new world of adventure!
Written and directed by Chris Sanders (Lilo & Stitch) and Kirk DeMicco (Space Chimps),THE CROODS is “an Animated Avatar,” hails Bill Bregoli of CBS News and is the must-see animated film of the year! Fans of all ages will be cracking up for the adventure everyone loves. Led by an outstanding voice cast featuring Oscar®-winner* Nicholas Cage, Golden Globe®-nominee** Emma Stone, Ryan Reynolds and Oscar®-nominee*** Catherine Keener, the Croods invite your whole family to travel back in time and discover their world.
The purchase of the Blu-ray™ or DVD unlocks additional content on THE CROODSColoring App, which allows children to color their favorite characters and scenes from the film, add text and voice to the story, and then share their storybook on their TVs at home. Also on the Blu-ray™, families can join Guy, Eep and Belt as they introduce the crazy “Croodaceous Creatures” – the striking and unique animals from the film – and much more. And for a limited time only, any purchase of the Blu-ray™ or DVD comes with a lovable Belt toy! Dun Dun Dahhh! Pre-order today!
DreamWorks Animation’s The Croods Blu-ray™ Deluxe Edition
The Croods Blu-ray + DVD + Digital Copy Deluxe Edition include a Belt plush toy for a limited time and more than an hour of bonus features:
Feature film in high definition
Blu-ray Exclusive Bonus Features:
Additional Bonus Features:
DreamWorks Animation’s The Croods Blu-ray™ 3D Deluxe Edition
The Croods Blu-ray™ 3D + Blu-ray™ + DVD + Digital Copy Deluxe Edition includes the following:
Feature film in high definition and 3DAll the Blu-ray™ and DVD content listed above
DreamWorks Animation’s The Croods DVD
The single disc DVD includes a Belt plush toy for a limited time plus the following:
Feature film in standard definition
Bonus Features:
ABOUT DREAMWORKS ANIMATION
DreamWorks Animation creates high-quality entertainment, including CG animated feature films, television specials and series and live entertainment properties, meant for audiences around the world. The Company has world-class creative talent, a strong and experienced management team and advanced filmmaking technology and techniques. DreamWorks Animation has been named one of the “100 Best Companies to Work For” by FORTUNE® Magazine for five consecutive years. In 2013, DreamWorks Animation ranks #12 on the list.  All of DreamWorks Animation’s feature films are produced in 3D. The Company has theatrically released a total of 26 animated feature films, including the franchise properties of Shrek, Madagascar, Kung Fu Panda, How to Train Your Dragon, Puss In Boots,&#160;and The Croods.
ABOUT TWENTIETH CENTURY FOX HOME ENTERTAINMENT
Twentieth Century Fox Home Entertainment is the industry leading worldwide marketing, sales and distribution company for all Fox produced, acquired and third party partner film and television programing. Each year TCFHE expands its award-winning global product portfolio with the introduction of new entertainment content through established and emerging formats including DVD, Blu-ray™ and DigitalHD™. Twentieth Century Fox Home Entertainment is a subsidiary of 21st Century Fox.
Read Complete Article
Filed Under: Film Headlines Tagged With: 1st, animations, arrives, belt, bluray, comedyadventure, ...
Page 1 of 1