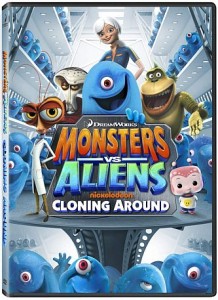 DreamWorks Animation is known for turned their successfully films franchises into successful animated shows. They did it with “Madagascar”, “Kung Fu Panda”, “How to Train Your Dragon” and even “The Croods” is already on its way to the small screen. “Monsters vs. Aliens” is the latest of the films to be given the TV treatment. I have to admit, I wasn’t a huge fan of the film itself. I thought it was good but not the best thing to come out of DreamWorks Animation. I also feel that maybe its time has passed a little. I could have seen this be more appealing a few years ago but with no sequel following the first film, this series is not Dreamworks hottest property. The episodes are still worth watching if you like the film.

The following episodes are included: “Welcome to Area Fifty-Something”, “It Came…On a Field Trip / Educational Television”, “Danger Wears a Diaper / The Toy From Another World”, “Flipped Out / The Wormhole Has Turned”, “The Bath Effect / The Fruit of All Evil”, “The Two Faces of Dr. Cockroach / The Thing With One Brain”, “Fremeny Mine / Maximum B.O.B.”, “Night of the Living Dog / Attack of the Movie Night”. Like “The Penguins of Madagascar”, the episodes are 11 minutes each, which does works well for the show and keeps it fast pace. This DVD does not come with special features besides the episodes but within those episodes there are nearly three hours of action and comedy. Also included is a digital copy of the episodes and game app collection. There is also a promise of further installments with “Supersonic Joyride” arriving on DVD Spring 2014, so keep an eye out for more.