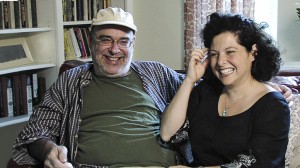 The internet really has everything from social networking to online shopping. Internet dating has really become a very popular medium for people to meet spouses over the years. This documentary focuses on five people that have used the internet to date and their stories. I have to give props to this film it was well paced and really kept my interest. All of the five stories were extremely interesting and provided great insight into the world of internet dating. I recommend this documentary with high regards.

The first of the five stories includes a woman Kim, who flew to Prague to marry a man she never spoke to. She finds he didn’t speak of lick of English except “Hello”. The two are happily married with children today. The next story is about Dave, who wasn’t very confident but ended up meeting many woman on the chat rooms and found his love, getting marrying and having a child. The next is about Beth who takes us on a journey of being single and turning 30. I really enjoyed her idea of walking around the city with a video camera filming her birthday wishes. She also ended up meeting her husband online, getting married and having kids. Ryan is next and his story is about his struggles being gay. He found “others” like him in the chat room and got wrapped up in politics scandal, when the closet Mayor of his city hit on him and many others. Jonas’ story is the last and focuses on a online website called Second Life, which is pretty much like “The Sims” but virtual dating. It also showed how he besides meeting his future wife and having a child, it also showcased how he was able to get picked up by a record label for his music. Great stories and each one better than the next.

If you are not aware of Robert Kenner, you need to be! He is the director of amazing documentaries like the Oscar nominated “Food, Inc”. The DVD comes stocked with some decent special features as well. We have one called “Bara & Director / Second Life Interview”, this was very interesting. I have never heard of Second Life prior to watching this. There is one deleted scene called “Cyber Cyrano”, worth checking out. Lastly we have a Q&A with the filmmakers, which is also very interesting. Overall very impressed with this film and this release.