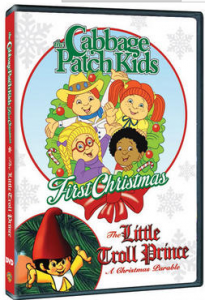 I may be a boy but I did grown up in the 80’s with a little sister. I remember watching “The Cabbage Patch Kids’ First Christmas”, which originally aired in 1984. It has been many years since then but now with a daughter of my own. I was excited to introduce her to the classic 1980’s Christmas special. Along with that special also included is the 1987 special “The Little Troll Prince Holiday”. This one I am not too familiar with but I certainly know the all-star voice cast including Vincent Price, Jonathan Winters, Don Knotts and Cloris Leachman. My daughter really seemed to enjoy both films quite a bit and wouldn’t take her eyes off the TV for “Cabbage Patch Kids”. This films aren’t overly Christmas themed but it was nice to start getting into mood even though it isn’t even Halloween yet, but that won’t stop me. I am sure we will be revisiting these too titles quite a bit over the next few months.

Official Premise: Fire up your Yule log and get set for an early Xmas, courtesy of Xavier Roberts and a wannabe gnome! The Cabbage Patch Kids First Christmas (1986) finds the magical brood leaving the safety of their Georgia hidden patch in search of the Christmas spirit in the big city courtesy of  Ruby Spears. Beyond the protection of their human guardian Xavier Roberts and Colonel Casey the stork, the kids find that the big city has its own brand of menace, one very similar to their own… Can they find the Christmas Spirit in time to help a very special orphan? The second feature, The Little Troll Prince (1984), finds Hanna-Barbera mixings Scandinavian folklore with traditional holiday spirit for a charming concoction about a royal monster that trades in menace for a simple life of domestic gnome-dom.

These films have never before been released on DVD and thanks to Warner Archive for making this DVD possible. I swear, a month doesn’t go by that this company doesn’t give live to some rare and unique film that was collecting dust. I did notice though that the transfers of the films were not the greatest. On Warner’s website, it says that they have been manufactured from the best-quality video master currently available, but they also haven’t been remastered or restored. Nonetheless, they still were completely watchable presented in their original aspect ratio of 1.37:1. The Dolby Digital audio track included works well with the music, especially the songs in “The Little Troll Prince Holiday”. There were no additional special features included.