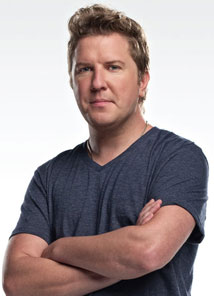 Nick Swardson is probably best known for his role in “Grandma’s Boy” and cameo appearances in numerous Happy Madison films, but a quick look at his career shows that he’s an incredibly busy guy. For people who aren’t familiar with Swardson’s work, he started doing stand-up at age 18 and since then has gone on to produce, write and act. Die hard fans have known this for years that he’s constantly writing, acting and working on fresh material for his stand-up. Media Mikes had the chance to catch up with Nick and ask him about the numerous TV and movie projects he’s been working on for 2014, as well as a new comedy special.

Jeremy Werner: It looks like you got a busy year ahead of you…especially this month. Let’s start off with “Back in the Day” which comes out on January 17th. How did you land the role of Ron?
Nick Swardson: Michael Rosenbaum, the director/writer, is a buddy of mine and he just called me up and he’s like, “Man I got this passion project I’m doing. It’s low budget. We have no money.” He goes, “It’s a great character. You’ll kill it. We’ll shoot in Indiana. It’d be fucking great to have you.” So he sent me the script and I thought it was a really funny character and it was something different than what I’ve done in the past. Ya know, it wasn’t a crazy character. It was a grounded, real dude. So I was pretty stoked. So as a favor to Michael too, I wanted to help him out. So I did it.

JW: Was there anything you had to differently than in past roles?
NS: It was just a lot more understated. I didn’t have to come in to the scene and be insane. This role is also based on a real guy so I was kind of interested to play a real dude…and I talked to Michael a lot about what this guy was like. So it was fun to play a real person.

JW: Was it a role that he had you in mind for the entire time he was writing it?
NS: He had the script for like 10 years. He had it for a long time. So I don’t know who he had initially envisioned, but he called me first.

JW: Now also this month, you have a big release on TV. “Chozen” premieres January 13th on FX and you play Troy. What can you tell us about that character?
NS: Troy plays Chozen’s nerdy, minion friend. He kind of saves him from bullies and so they become pals. Chozen shows him this whole world of sex and drugs. It’s pretty funny. The show’s pretty crazy..it’s one of the craziest things I’ve done and I’ve done a lot of crazy shit. Working with Danny McBride is awesome. His company is amazing. I love all the “Eastbound and Down” guys…it’s FX, so they really push the envelope.

JW: As a comedian, does voice acting provide you a lot of opportunities to improvise or are you restricted?
NS: No. I’m never restricted in anything I do. I only do projects where I can bring a lot to the table. I use to get fired just because I improvised a lot. It’s the main thing I do, I love improvising.

JW: I’ve read that usually in voice acting, you’re just kind of in a booth on your own. Who were you able to bounce jokes and ideas off of with your character?
NS: Usually you’re all alone…you’re just sitting in a booth and the producers are in the other room, so you just kind of run with it. They’ll give you a thumbs up if it’s good or they’ll do the heads up and tell you if it works. They’ll just feed you ideas…but it’s a great gig.

JW: Later this year you’ll also be voicing a character in the animated movie, “Hell & Back”. You actually voiced a character in the kid’s movie “Bolt”, but based on the premise I was reading…this is not a kid’s movie.
NS: (Laughs) Yeah, that’s pretty insane. It’s stop motion, so it looks like a kid’s movie. So if a kid saw it on TV he’d be like, “Oh! I wanna see this!” But it’s a hard, hard ‘R’. That’s another project that me and Danny McBride are both in with TJ Miller and Mila Kunis. It’s a great cast and that one’s gonna be really awesome. We’re finishing that up this week. I’ve got like one more record session…we’re really excited about that.

JW: Now with all these projects, are you working on any comedy specials this year?
NS: Yeah, I’ve been developing for the last two years, a new hour special and a new tour. So we’re looking to tour in the Spring…early Summer. Shoot the special maybe sometime in the Summer. It’s definitely in the works. It’s been a long time coming, but I’m really excited..it’s coming together really well.

JW: Anything you can tell us about it?
NS: It’s just more stories, drinking jokes and it’s nothing too out of the box. I’m not all of a sudden really political. If you’re a fan of mine, you’ll be happy with it. The new hour’s going really well. I think the title of it is gonna be, ‘Taste It’.

JW: I know last year you were talking about a show you were working on called “Bro-Sassin”. How is that coming along?
NS: Bro-Sassin’s done. It didn’t fly. The network just didn’t get it. They thought it was gonna be too expensive…so they kind of backed off it, which bums me out, man. I wrote the pilot and it was really funny. People loved it, I’m gonna save the idea for a movie. I sold a new show to FX. My own show with the director of “Grandma’s Boy” and Danny McBride’s producing it. It’s called “Game On”. It’s like the office of a video game company…so we’re developing the pilot right now.

JW: Does that have any connections to “Grandma’s Boy”?
NS: Not really.

JW: Looks like you got a lot of stuff going on, is there anything else you’re working on for later this year?
NS: A lot of it depends on the pilot with FX and shooting that, seeing if we get picked up. That’s the primary focus right now. I’m developing two other feature scripts. So if this FX pilot grows, I’m gonna jump into an idea I sold to Sandler and Happy Madison and I’ll hopefully write that next Fall and start developing that.

On Monday January 13th, FX will debut its animated comedy, Chozen from the creators of Archer and Eastbound and Down. Chozen stars Bobby Moynihan as the eponymous openly gay rapper who’s fresh out of a ten year prison sentence and looking to make it big on the music scene while getting revenge on those who put him in the slammer. I got to catch up with stars Moynihan and Method Man along with creator Grant Dekernion and executive producer Tom Brady at this year’s New York Comic Con.

Bobby Moynihan (this writer’s favorite Saturday Night Live cast member) was eager to join the cast of the show,  “I got the thing that said ‘do you want to put yourself on tape for this?’ where I had the drawing of all the characters and I saw—I was a big Archer fan—so I saw that and it was just like ‘I want to do this.’…I called my agents every single day. Like 9 o’clock in the morning, ‘hey found anything out about Chozen?’” This isn’t to say Moynihan identifies with the brash character, “he just says and does whatever he wants…he walks in the room, his sister’s having sex with somebody and he’s just like, [dropping into Chozen’s voice] ‘Ooh, you havin’ sex? Good for you!’ He’s just pumped about things. I feel like I would be like ‘Oh my god, I’m so sorry! I apologize!’ And then never talk to my sister again…Just everything he’s thinking is just out there.” The comedian did add a personal touch to how he sees Chozen spending his time in jail though. “In my mind he just spent a lot of time aggressively going after taking what he wanted and just watching Lost…I keep saying it so hopefully it will come out. I’m a weird Lost nerd…I want to do a whole episode where it’s just him in jail watching Lost.” Would Chozen then have enjoyed that drama’s finale? “YES. YES” Moynihan says emphatically of his cartoon alter ego before adding, “It was perfect, I truly loved it.”

Moynihan is also a talented improvisational comedian, notably appearing recently on IFC’s Comedy Bang! Bang! as murderous orphan Fourvel (it’s one less than Fievel). “I didn’t really have much other than the name [and] that one joke” Moynihan says, “Just being able to improvise with Scott [Aukerman] and Paul F. Tompkins was a blast.” Fortunately we’ll get to hear Moynihan improvise in Chozen as well—“I feel very very lucky. It’s a lot of fun improvising and a lot of ‘oh my god, that was crazy, don’t use that…I don’t want the people to hear the fact that I said those things!”

Method Man plays Phantasm, the villainous ex-band mate of Chozen who was responsible in setting up the drug bust that puts Chozen behind bars. The rapper maintains that the sleazy voice he lends to Phantasm “comes from a family member named Daddio…you know, he smokes these backwoods cigars and it’s gotten to the point where his voice is so low you can’t even hear him!” Despite his background however, Method Man maintains he’s not behind the musical writing of the series “since I’m playing a character and not Method Man, no, I will not” although he’s not ruling it out adding, “if they gave me a shot to, maybe.”

Behind the songwriting, and singing voice of Chozen is creator Grant Dekernion who was asked if we can expect more musical acts to come on the show in the future, he explained: “Obviously we got Method Man which blew my mind—and that’s definitely helped us open doors. You know, we’re hoping later this season we might see some more musical acts, I think once the show comes out and people get behind it and see what it’s about, that’s definitely something we can play with in the future. But I think just a lot of people are just curious to see it.”

Both Dekernion and executive producer Tom Brady are particularly excited to be creating the show for the FX network. “Been doing this a little while and you know, I’ve been part of shows that have been on networks and different cable shows and stuff and this is the right show for the right network” says Brady. “The content, the subject matter, FX seems to invest in voices. In this case, Grant’s, from his brain. And if they buy into it, they support it, they let you grow and they nurture it.” Other FX hits include It’s Always Sunny in Philadelphia and The League. Of the creative teams behind those shows, Brady adds “we’ve heard them talk about how supportive FX has been and them finding what identity those shows have, so that’s been kind of cool for us to think ‘hey, maybe we could be like that.’”