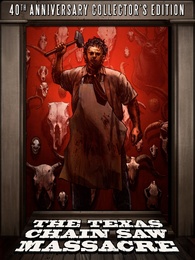 Love it (myself) or hate it (my wife), “The Texas Chain Saw Massacre” is an absolutely classic in the horror genre. It is iconic and has stood the test of time. Speaking of time, the film is celebrating it’s 40th anniversary this year. MPI Media Group is re-releasing the film on Blu-ray presenting the original restored film in an all-new 4k scan authorized by Tobe Hooper and a ridiculous all-new 7.1 channel soundtrack. If you think you have seen “The Texas Chain Saw Massacre” before, think again because watching this Blu-ray is like an entirely new experience.

Official Premise: It has been called grisly, sick, and perverse, as well as raw, unshakeable, and the movie that redefined horror. It was attacked by churches, banned by governments, and acclaimed by only the bravest of critics. It stunned audiences worldwide and set a new standard in movie terror forever. Today writer-producer-director Tobe Hooper s dark, visionary tale remains unparalleled in its impact as perhaps the most frightening motion picture ever made.

“The Texas Chain Saw Massacre: 40th Anniversary Collector’s Edition” is released as a kick ass DigiPack  combo pack with two Blu-Rays and two DVDs. If this only had a digital Ultraviolet copy, it would be absolutely perfect. The film itself is gritty and was shot on 16mm film, so this film never looked really amazing. I remember watching it on VHS tape and if you could compare that to this new Blu-ray, it would be like two different films. For this release, the film was mastered in 4K and presented on Blu-ray in 1080p high definition. It just looks terrific. Horror fans get ready to do a back flip.

I never thought I would be seeing a film like “The Texas Chain Saw Massacre” with DTS-HD Master Audio 7.1 surround track on Blu-ray but that is what we get here. You would expect this track from a big-budget summer action but never a 40 year old horror film. This track is fantastic and works so well with all aspects from the revving of the chainsaw to the  famous flash photography sounds. Along with this epic track, there are three other tracks including a DTS-HD Master Audio 5.1, LPCM 2.0 and LPCM Mono. So there are tracks for everyone whatever you are craving

The special features are split over two discs. The first disc is purely audio commentary tracks. Anything you ever wanted to know about this film is included in these tracks. The first track is with Producer-Director Tobe Hooper, Actor Gunnar Hansen, and Cinematrographer Daniel Pearl. The second is with Production Designer Robert Burns and Actors Marilyn Burns, Allen Danziger, and Paul A. Partain. The third is Writer-Producer-Director Tobe Hooper. The last is withCinematographer Daniel Pearl, Editor J. Larry Carroll, and Sound Recordist Ted Nicolaou. One is better than the next.

The second disc includes “The Texas Chain Saw Massacre: The Shocking Truth”, which runs over 70 minutes. “Flesh Wounds: Seven Stories of the Saw” is another 70 minute featurette. Between these two extras, you will be exhausted with knowledge. “A Tour of the TCSM House with Gunnar Hansen” is a chat with Leatherface himself. “Off the Hook with Teri McMinn” and “The Business of Chain Saw: An Interview with Production Manager Ron Bozman” are interviews with the respective actors.

“Grandpa’s Tales: An Interview with John Dugan” features the actor reflecting on his iconic role. “Cutting Chain Saw: An Interview with Editor J. Larry Carroll” talks about his work on the film. There are 15 minutes of BRAND NEW Deleted Scenes and Outtakes along with the previous released 25 minutes of additional Deleted Scenes and Outtakes. There is also a Blooper Reel, Horror’s Hallowed Grounds, Still Gallery, Trailers, TV and Radio spots included.