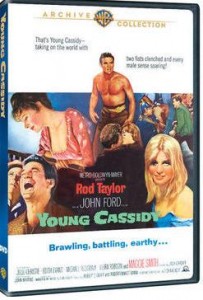 Warner Archive’s is releasing another film in Rod Taylor’s filmography following “The Liquidator”. This film is not as entertaining. It was stated that Leonard Maltin’s Movie Guide’s has called this his “best role ever” for Rod Taylor. I agree that is it a very engaging and emotional role and he did nail it but the film itself is where I had issues. The running time dragged for me at almost two hours. Good supporting roles comes from Julie Christie and Maggie Smith. At least this film carried the approval from O’ Casey himself and was based on his autobiography.

Like in the past though, Warner Archive does not disappoint the the newly restored transfer of this film.  It is presented in its original aspect ratio of 1.66:1 and in 16X9 widescreen letterbox.  The audio in the film is nothing that the Dolby Mono track can’t handle either.  Nonetheless, if you are a fan of Taylor’s work and looking for a chance to own this piece of cinema on DVD…you know have the chance.  The only special features included on this release is just the trailer for the film.

Synopsis: Young John Cassidy is a driven man. By day, he works manual labor, secretly trains in the hills with a band of revolutionaries eager to take Ireland’s fate into their own hands, joins mates for a pint, or sometimes enjoys the company of a lovely Dublin lass. By night and into the wee hours, he puts pencil to paper and writes of working-class Irish life. He will – he must – be a writer. The coming of age of renowned Irish playwright Sean O’ Casey (Cassidy is a name O’ Casey sometimes used for himself) comes to the screen in a colorful and atmospheric biopic directed by legendary John Ford (who left the film due to illness) and Jack Cardiff. Rod Taylor plays the title character, bringing strength and earthiness to his “best role ever” (Leonard Maltin’s Movie Guide). A talented cast – including Julie Christie and Maggie Smith – adds to the appeal of a film whose script was 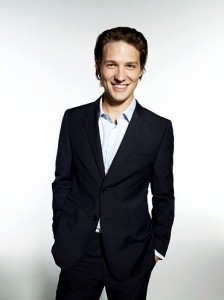 Michael Cassidy recently co-starred as Tyler in TBS’ hit new comedy series “Men at Work”.  The show is already in production for it’s second season.  Media Mikes had a chance to chat with Michael about the first season and what he enjoyed most.

Mike Gencarelli: Tell us what you enjoyed most about playing Tyler in “Men at Work”?
Michael Cassidy: Getting to see some of Tyler’s specific preferences was really fun. When we did the pilot I didn’t know that he was going to have his own thing. The toilet episode was a lot of fun as were some of the more recent episodes. All the things that Tyler has going on are just so much fun to watch come out. Everyone on the show has enjoys making fun of me and the character.

MG: How was it working in front of a studio audience?
MC: That was definitely a favorite of mine as an actor. We have such great audiences and I don’t know if you can really have a bad audience in that type of set up. Things have been great. I did theater in the past so this was comfortable for me. It was familiar without being boring. To work on a show all week and then perform it in front of a live audience all the while not knowing how it will be received is very rewarding. It’s phenomenal.

MG: What has been a highlight for you from season 1?
MC: My two favorite episodes where the toilet episode, where Milo moves in with Tyler and also the last episode of the season. We shot so much for that last show in front of an audience. A

MG: In the episode “Decath-Lynn”, how did you not die laughing with the meeting song titles?
MC: We rehearse the scenes for about a week. By the time we are in front of the audience our professionalism takes over and we start wondering how the scene will play. Throwing something out and waiting for the audience to react is just so fun. Sometimes you do get new stuff that hasn’t been rehearsed. That stuff tends to go off like a grenade. We will hold it together while the audience laughs and then we just crack up. That’s really my favorite part of the whole deal.

MG: Were there any guest stars from this season that you were really excited to work with?
MC: I couldn’t wait to work with JK Simmons as I wanted to ask him about working with the Cohen brothers. I also loved working with Billy Baldwin. He had never done multi-camera stuff in front of an audience before so he was super stoked to be there. He was really great to talk with and once he got in front of the audience he just blew up.

MG: How does your work on this show compare to some of your previous work?
MC: This show is a different demographic. It’s definitely a male skewing show. I have never done a show like this. The other shows I have done were slightly more favoring women. I am sort of playing more of an adult on this show. I am a young professional. It’s nice playing a character that has a job. (Laughs)

MG: When does production start on season 2?
MC: We are currently in production already. We don’t know when it’s going to air but what we have heard is it will be sometime in 2013. For now I guess we will shoot a bunch of episodes and just wait and see.