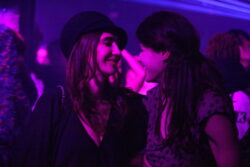 During the pandemic, one of the podcasts that I’ve been listening to has talked a lot about how the powers to be should release “Chaos Walking.” Firstly, they want to see a Charlie Kaufman written film. Secondly, they say the studio has re-shot, re-edited and shelved the movie several times over the past several years. The podcast hosts are generally curious if it’s bad and how bad it really is. As much as I’m curious to see a movie with Tom Holland and Daisy Ridley, that was written by the wildly creative Charlie Kaufman, I also understand that sometimes a movie is simply bad, but not an entertaining train wreck like “The Room” or “Catwoman.” Sometimes they’re just awful and forgettable.

There’s plenty of examples, but the most recent one is “Lost Girls & Love Hotels,” a movie that’s almost spent three years collecting dust. From what I gather, it’s been kicked around for nearly a decade and a half in Hollywood, based on a book by the same name. The plot is pretty simple. Margaret (Daddario) lives in Japan as a teacher of sorts, helping flight attendants with their English. After work, she wanders aimlessly throughout bars and other clubs, having sex with strangers, drinking copious amounts of alcohol, and generally staring off into space. But her sex life is the main focus, since she prefers it rough. Rough like, being choked with a belt and being tied up with zip ties or rope. I’d make some comparisons to “50 Shades of Grey,” but “Lost Girls & Love Hotels” predates “50 Shades Grey” by about five years.

The movie is a poor character study/sexual exploration trip through what I assume is Japan’s Red Light District. Unfortunately none of it is interesting. The main reason being that Margaret isn’t compelling. We can tell that she’s damaged, but we never get a feeling or even told about the extent of that damage. The information we do get is so cliché it makes you think this concept was written during the steamy sex thrillers of the 90s. When Margaret encounters Kazu (Hira), a dangerous criminal of some sort, she begins to sexually and emotionally open up, but nothing substantial about her emotions or thoughts are revealed. I could understand if it’s intentionally up for interpretation, but it’s so vague that the viewer’s interpretation can fly wildly from one extreme to another.

I assume the other characters are simply surrounding Margaret because we’re supposed to mine Margaret’s internal thoughts from questions she asks other characters, since she’s never interested in divulging about herself. However, the characters seem to act and talk to her like they know everything and don’t need to ever pick her brain. About halfway through, I think, we finally learn why she’s in Japan and why she’s a bare minimum teacher of basic flight services. That’s pretty much it in terms of character exposition. As the film goes on, Margaret’s self-destructive nature feels more nihilistic than sympathetic. There comes a moment where Margaret drunkenly stumbles across a missing poster for a young girl. The movie wants us to feel like this is poignant, but instead it comes off as tone deaf.