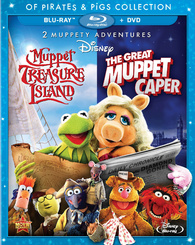 Since Disney took over “The Muppets”, they have been doing great things for this group of puppets. “The Great Muppet Caper” (1981) and “Muppet Treasure Island” (1996) are making their Blu-ray debut this holiday season on a 2-Movie BD/DVD Collection. “The Great Muppet Caper” is the second Muppet film and one of my favorites growing up. Still fun to watch after all these years. Muppet Treasure Island” is a fun musical version of the classic tale from Robert Louis Stevenson. It isn’t perfect but who doesn’t love Tim Curry singing? So this collection is a must for any Muppet fan. In fact, these two were the last Muppet films not released on Blu-ray, so I am wondering if Disney will be reissuing “The Muppets Take Manhattan” and “Muppets from Space” next under the their label both of which were releasing on Blu-ray by Sony back in 2011. Either way fans have plenty more to come with the eighth film, “Muppets Most Wanted”, which will be released on March 21, 2014.

Official Synopsis: A treasure trove of hearty laughs is yours when two of the funniest, most action-packed Muppet movies of all time make their Disney Blu-ray debut in this heartwarming 2-Movie Collection. From the special star-studded lunacy in Muppet Treasure Island to the jewel-heist hilarity of The Great Muppet Caper, these two classic comedy-adventures are packed with music, mirth, mayhem and, of course, Kermit, Miss Piggy, Animal, Fozzie, Gonzo and all your Muppet favorites. Loaded with unforgettable music and sparkling special effects, this restored and remastered collection is a 2-movie treasure you won’t want to miss.

Disney has done a wonderful job of delivering this film to Blu-ray with stellar 1080p transfers. Even though “The Great Muppet Caper” is over 30 years it still looks quite amazing. Same goes wiht the DTS-HD Master Audio 5.1 surround tracks, which work very well with the music in the films. In terms of special features, this release include a few decent features. There are three “Frog-e-oke Sign-Alongs” for the songs “Cabin Fever” from “Muppet Treasure Island” and from “The Great Muppet Caper” their is “Steppin’ Out With A Star” and “Happiness Hotel”. “The Tale of The Story Beyond the Tail” is a fun behind the scenes look with the Muppets on the making of “Muppet Treasure Island”. There is a fun music video “Let the Good Shine Out”. Lastly there is a super funny and very interesting audio commentary track with Gonzo, Rizzo and Brian Henson.