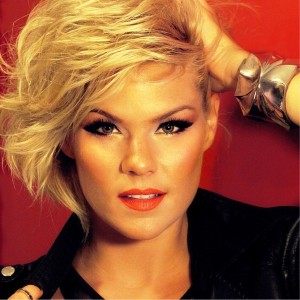 Kimberly Caldwell is no stranger to the spotlight and has been performing since the very early age of 5. She appeared on the second season of Fox’s hit show “American Idol”, released her first solo album in the 2011 titled “Without Regret” before venturing in to the world of television hosting. Kimberly has recently returned to her singing roots with the release of a new song titled “On the Weekend”. Media Mikes spoke with Kimberly recently about the new release as well as about her time on “American Idol”.

Adam Lawton: What first sparked your interest in trying out for “American Idol”?
Kimberly Caldwell: I started out in beauty pageants when I was 5. When I was 11 I appeared on “Star Search” and ended up holding the record for most junior vocalist wins. I just loved that show and being on it was a dream come true. From there I ended up performing in Branson, MI in a production titled “Country Tonight”. I was kind of trained to be a singer. At about 15 I took some time off for high school and did all of that good stuff. By the time I was 20 I was still living with my Mom and we both decided I needed to be doing something. That’s when the idea to audition for the show came about.

AL: What was the audition process like for you?
KC: When I auditioned the show was still very new. Things were much different then as they are now. I slept on the side walk in Texas on a futon for about 2 days. My friends would bring me food and stuff to help pass the time but it was rough. There was a girl in line that did let me shower at their house while my cousin held my space. That was really nice of them. They had given tickets out to get in to the audition so my cousin was in charge of that while I went to shower. When I got back the ticket was gone. One of the show staff walked by and I explained to them that my ticket was gone. He ended up remembering me from being on the WB’s “Pop Stars” as he had worked on the show so he thankfully let me in. I was really very lucky. After that I had a couple auditions where there were some really good singers. I was chosen out of those groups after auditioning for Nigel. It was after that when you finally get interview by Ryan. I remember that day very well because I had the most awful outfit on that you could ever imagine. I seriously looked like a hooker. I went in and sang “Superstition” by Stevie Wonder and went on to Hollywood. I made it in to the top 24 and after the Wild Card Randy brought me back for the Top 10 where I finished 7th overall.

AL: What was it like transitioning from being a singer to being a television host?
KC: There have been some aspects of transition however I have always wanted to entertain people. Where someone will give me a microphone I will use that microphone. From the day I got booted from Idol I was talking to people with in the business. I ended up getting an offer to be a host on Fox Sports and have been working and living in Los Angeles ever since. My job at Fox helped me find my legs as a host. From there I went on to do some more tings with Idol and work with TV Guide. For over 7 years I had a number of my own shows where I did various hosting duties. During this time I did realize that my main dream was always to write and record an album. I stopped hosting and began focusing once again on music. Music is a huge part of me and it is something that I just have to do.

AL: Can you tell us about your new song “On the Weekend”?
KC: I had started doing shows again and my guitar player Andrew who was producing the music for the shows he and I started working together on new material.  We sort of just did it for fun and after awhile we had some really amazing songs. One of those was “On the Weekend”. I think this is such a great anthem for the 9-5 person. The song really represents who I am and was one I wrote just for me.

AL: Can you tell us about the video for the song?
KC: People have always been intrigued by hair for I can’t remember how long now. I am always being asked how I get it to look certain ways. Really all I do is go to the grocery store spend $8 on shampoo, wash it and then cut it with construction paper scissors to how I want it to look that day. (Laughs) It’s not difficult but people seem to like what I do.  I was getting a lot of attention in the hair and beauty world and got a column with Sophisticate hair Style guide. Out of that I got a sponsorship to do my video. We teamed up with Let’Em Have it Productions who did this video is just great. A bunch of my friends helped with it and it was just a lot of fun. I had all sort of people come out and play the different roles in it. Even my sister has a role in the video. Terry and Clint the owners of the company were so professional and relaxed. It couldn’t have been more fun. When I got to see the first cut of the video I loved it and that’s pretty much what we ended up releasing as the final video. For people who still haven’t seen it yet they can check it out at www.Kimberly-caldwell.com

AL: Have there been talks of doing a full length album?
KC: We did two other songs besides “On the Weekend”. These days not a lot of people are doing full-length albums. Ep’s seem to be the way to go as you only need a few songs for one of those. On my first album there were a lot of great songs that didn’t get a lot of notice because there were just so many songs on that record. I feel very strongly about packaging these three new songs together as an EP format as they all are just so good. All three of the songs are now available on ITunes.

AL: Can you tell us about some of your other projects?
KC: When I am in Los Angeles I am always on the go doing something. When I am in Vancouver with my Fiancé I have nothing going on. (Laughs) One day while I was there I just started wandering around the city looking for something to do. I have always wanted to make some sort of accessories line and my Fiancé said that if I did it I should call it “Stage Presents”. I thought that was great name. I just started collecting things and putting it all together on my living room floor. I bought my own sewing machine and started taking lessons. I started working with a leather company who taught me all sort of different skills on how to make various things out of leather. A lot of what I have learned has been through trial and error and watching YouTube videos. I think I have gotten pretty decent over the last few years. I now have an Etsy store at www.etsy.com/stagepresents . I am also in the final stages of completing a Stage Presents hair accessories line.