Who’s ready for a Bunch O Balloons Party?! Party planning can be tons of fun, but the execution itself can literally take your breath away, especially when it comes to balloons, but there is a magical game-changer to it all! With Bunch O Balloons Self Sealing Party Balloons you can fill, tie and string 40 balloons in only 40 seconds. There is literally no more blowing, no more tying and no need to add ribbon or string! Simply attach the stems to our Electric Party Pump nozzle and press GO! Within seconds, your Bunch O Balloons Party stems will fill and selftie with ease and convenience and once inflated, you can cut the stems (hard cord) and the ribbon remains! All our Balloons are totally reusable and refillable and come in so many colors and themes. Our Electric Party Pump is also compatible with helium tanks for even more fun and convenience! Whatever you choose, make sure you join the party and fill, tie and string up to 40 balloons in just 40 seconds! See it for Yourself – BOB Party In Action for a WOW Factor:

Bunch O Balloons 100 Self-Sealing Water Balloons – Unleash the thrill of summer with ZURU Bunch O Balloons! Fill and Tie 100 water balloons in less than 60 seconds with these sensational self-tying water balloons! With innovative O-Ring technology and Rapid Fill capabilities, say goodbye to the stress and mess of filling individual water balloons and say hello to never ending splash out loud fun! Simply connect to a tap or a hose, fill and make hundreds of water balloons with no hand- tying. Take them to a pool party, to your backyard, to a barbecue, the beach or anywhere else to unleash summer no matter where you are! Summer’s too short, make sure you spend it having splashing refreshing fun! This pack includes 3 Bunch O Balloons (100 Self-tying, Rapid Fill Water Balloons). Bunch O Balloons are the award-winning (Toy of the Year) patented invention that helps you make the most out of summer with friends and family! Ages 3+, 3 pack $9.99, Available at Target, Walmart and Amazon.

Fill, Tie and String 40 Balloons in only 40 seconds – Prep Less and Party More!

We are thrilled to share that a real game-changer for any kind of a party/get-together or specialized event (anniversary, graduation, weddings, baby and bridal showers, kids and adult parties) you can imagine for everyone at every age called Bunch O Balloons Self-Sealing Party Balloons™ (BOB Party) from ZURU! Balloons truly bring a sense of happiness to everyone and this is one of those (WOW kind of product’s) you really must see to believe how totally awesome it is!

Party planning can be tons of fun, but the execution itself can literally take your breath away, especially when it comes to balloons, but there is a magical solution to it all! With Bunch O Balloons Self-Sealing Party Balloons™you can fill, tie and string 40 balloons in only 40 seconds. There is literally no more blowing, no more tying and no need to add ribbon or string! Simply attach the balloon stems to the Electric Party Pump and press go! Within seconds, ZURU Bunch O Balloons Party Balloons will fill and self-tie with ease and convenience. Think how many balloons you can make in minutes without losing your energy and making every event a showstopper and the talk of the town!

See it for Yourself – BOB Party In Action:

ZURU Bunch O Balloons Self-Sealing Party Balloons are reusable and refillable and come in a variety of colors and themes.  In addition, they can also be filled using a helium tank or an air compressor. 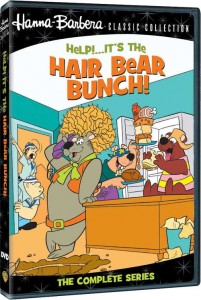 I am a big fan of pretty much anything Hanna-Barbera. I have to admit, I guess I am too young but I have never heard of “Help!…It’s The Hair Bear Bunch!”, which dates back to 1971. It only lasted one season and 16 episodes on the air. Even though it may not be Hanna Barbera’s best product, they have appeared in various other programs including Hair Bear’s cameo in “Harvey Birdman, Attorney at Law”. There was even a reference in “The Brady Bunch” to the show. After watching all 16 episodes I have to admit, I went to grab the next disc for more episodes. So to me that means that I really enjoyed this show. It is zany, silly and just plain fun. It also features great voice legends like Daws Butler (who takes a page from his Yogi Bear voice), Hal Smith (who was one of the original voices of Winnie the Pooh). I would recommend checking out this DVD.

Official Premise: In the Wonderland Zoo there are the certain bears who stay at home every night and never quarrel or fight, aw, they don’t even bite! So don’t yell “Help! Help!”, it’s the Hair Bear Bunch! Yep – it’s the heppest, savviest and silliest ursines to ever crash out of a zoo, Hair, Square and Bubi Bear. Their bear cave transforms from stone and straw to a swinging, scientific bachelor bear pad at the touch of a button – and that’s just the tip of the iceberg! Quick-talking Hair (voiced by Daws Butler), befuddling curlicue talker Bubi (voiced by Paul Winchell) and master of the invisible motorcycle, the zen-drawling Square Bear (voiced by William Callaway) are more than a match for their “keepers” Mr. Peevly (voiced by John Stephenson) and Botch (voiced by Joe E. Ross) – with or without the other delightful denizens of Wonderland Zoo, who are always ready to help the Bears in their bigger-than-the-zoo schemes. This two-disc, 16 episode collection contains all the mod bears madcap extra-zoohicular adventures.

This complete series are said to be newly restored but I am not doing back flips with the transfers. They are good but they look like they are still dated from 1971. The colors are a little muted but work enough to enjoy the series. The episodes are presented in full screen 4×3 with an aspect ratio of 1.37:1. This is the first time that this series has been released on DVD, so I am thrilled enough just to see it get some love. Thanks as always to Warner Archive. They are always responsible for pulling out some very unique and rare shows from the vaults and give them a new life. I can’t wait to see what they come up with yet. This release is available on only on WBShop.com and is MOD, which means “Manufactured on Demand”.  So if you are a fan of this show there is no telling how long they will be available so get it now.